It’s not easy feat attracting millions of views on your YouTube channel, however Mawaan Rizwan has managed to achieve this with his online TV channel. The actor/comedian has enjoyed over 11 million views, with this stat only increasing. What’s clear, whilst watching his channel is his sense of fun and quirkiness, qualities that are very prevalent within his latest show, Twerk in Progress. 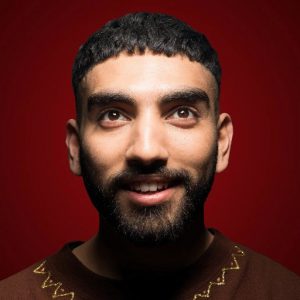 Programmed as part of Alchemy 2017, Twerk in Progress is the perfect antedote to your typical, chilled out Sunday evening. From the very moment the audience take their seats, Rizman immediately lifts the mood with his outlandish dance moves. Accompanied by a feel good soundtrack of club and disco classics,  Rizwan has the audience on side. For those new to Rizwan’s style of comedy, myself included, he creates his own bar, setting an expectation that will hopefully sustain through out.

Rizwan does not disappoint. The 60 minute set amuses consistently, his take on buffoonery a refreshing and vivacious one. The evening is not at all about taking itself seriously, rather Rizwan is game to make himself look as ridiculous as possible and this is endearing. The evening is not to be a passive one either; audience participation a component within the show. Rizwan’s running joke of recording the temparature of an audience member to check whether they are keeping up with the show becomes funnier by the second. In order for this to work, the audience member has to be game for a laugh, and he is. Their rapport contributes to the comedy of the evening, Rizwan responding if the audience member’s temperature drops.

The evening is an eclectic one, Rizwan incorporates improvisation to further lighten the mood. Combining two random existing words together, Rizwan claims to be able to think up a new meaning for them. This adds to the silliness and his quirky world that he has established. Songs further draw the audience into Rizwan’s world, the evening’s ethos of not taking life to seriously prevalent throughout. Songs including the similarities between the trivial traits all humans display behind closed doors contributed to the randomness of the show and further breaks down the barrier between the performer and the audience.

The evening is called Twerk in Progress for a reason, and it definitely deserves its title. Rizwan comically creates opportunities to twerk, automatically causing belly laughs. Rizwan’s use of physicality is fun, the mood is vibrant, he brings his own interpretation of clowning to the fore and it’s a delight to watch. 4/5

Twerk in Progress was shown at the Southbank Centre as Part of Alchemy 2017 on Sunday 29th May. For more information on Mawaan Rizwan, visit here…