Common is a convoluted tale of Mary, a young woman presumed dead yet returns to her village from the hellish town of London. Mary played by Anne-Marie Duff, is a clairvoyant and a little manipulative. She’s trying to get Laura, her lost lover back from the clutches of Laura’s brother King, who has carnal feelings towards his sister. The harvest has not been going well either and friction is rising amongst the villagers. Lesbians, intersected with potential incest, with a talking crow thrown into two hours of ambiguous storytelling, painfully fails to hit the mark. 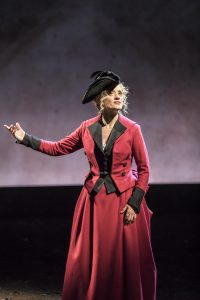 DC Moore’s new play is troublingly muddled. The choice of topic is noble: that of enclosure which saw a surge in the late 18th century of privatization of public lands and leading to calamitous consequences for the communities who had previously benefitted from common use of the land. However, it fails to convince. The play is extremely dialogue heavy, with long-winded lexicon that ends up feeling monotonous.

Some good moments can be found, for example in the character of Eggy Tom with his father on his arm, his soul having passed into a crow’s body. Lois Chimimba is one of the brighter sparks in an evening that is often dull and lacking in coherence. A strong moment is played out when tensions in the village grow and the villagers turn against Mary, whilst masked as animals.

Duff valiantly tries to soldier through but even she cannot save this confused and lacklustre play. She shines at times but is ultimately bogged down by a haphazard storyline. Cush Jumbo portrays Laura with strength, tempted by Mary but ultimately punishing her for her years of absence.

The set is good; the importance of the land in the story is amplified with a bare set consisting mostly of earth. The live band is also good, with remarkably atmospheric music. Unfortunately for Common, its programme is of more interest than the production. 2/5

Common is currently showing at the National Theatre until Saturday 5th August. For more information on the production, visit here…