A tangled set of wires, some of which are exposed dangle down, knotted wires lay on the floor and a broken bicycle hangs from the ceiling, a simple yet effective design by Gary McCann. Gary Owen’s new play, Killology asks the pressing question: do violent video games catalyse violence in real life? 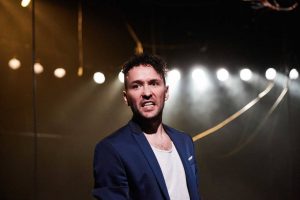 We are introduced to three men of different ages: a young child growing up in a rough part of town, a father regretful of his faded presence in his son’s life and the creator of this revolutionary gaming experience. With an interweaving, and at times non-linear story line, Owen has made a fascinating play on the blurring of lines between reality and the imaginary.

Owen presents an emotional story of children being bullied and battered alongside a community driven gaming experience, which rewards the most inventive killing methods, bonus points for excruciating brutality. Owen keeps the audience alert and absorbed. The fast-paced dialogue keeps the tempo high. The tale twists and turns creating parallels between sons and fathers. The parallel of real-life violence (bullying, slitting throats of pets) alongside that of Killology, which pays homage to creations by its users such as the golden shower mini-game, it is fascinating to watch as the story unfolds.

The play consists of a series of monologues delivered by three characters. Seán Gleeson as Alan, is expressive, a vengeful father. He is expressive and emotional and wholly convincing. Alan has a relationship with his son, despite years of not being present in his son’s life; they still manage to share a somewhat caring bond with one another. Richard Mylan as Paul, is young and nauseating, deems his game as a moral experience, where players should understand what is pretend and what isn’t. The hand tick he has when stressed, is just one of the many things that show the attention given to finer details. Mylan muffles a few lines but it does not detract from his performance.

Sion Daniel Young as Davey is captivating. He is extremely engaging, with descriptive facial expressions and a strong portrayal of sadness and rage. Young showcases a great range of acting skill. From a broken home and a dangerous neighbourhood, one can sense the strong anger and spite he feels towards his mother. As Davey grows older he remains humorous, as he describes sadist 15 year olds tormenting the younger runts, or when he claims ‘obs and gynae’ remains a mystery to him.

Killology skilfully examines relationships and morality, and quite successfully manages to analyse fractured masculinity and profound loneliness, which afflicts all three men. 4.5/5