The Island @ The Southwark Playhouse Review

Governed by the discriminate structure of apartheid from 1948 to 1994, the social and political landscape of South Africa witnessed a harrowing era within history, with remnants still echoing today. Dismantled by influential revolutionary turned president Nelson Mandela, apartheid relied upon a white minority overruling the non white majority, diving a nation. Athol Fugard’s The Island, takes inspiration from Mandela’s imprisonment on Robben Island for 27 years. During his time he’d take part in a performance of Antigone that would witness a case of art mirroring reality. 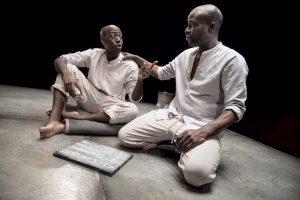 John Terry directs a visceral production. Pre-show, the two protagonists quieten the mood with their presence alone. Taking to the stage, situated in the centre of the space, Diane Alison-Mitchell‘s gruelling work sequence consisting of digging, piling up sand and pushing wheelbarrows makes for an uncomfortable watch. This sequence alone forces the audience to really pay attention. Terry wants for their to be an immediacy that can not be switched off and therefore the audience experience a range of emotions, from intrigue, to sympathy, fatigue to a relief that their hard slog has concluded… for the day anyway.

Edward Dede‘s Winston and Mark Springer‘s John are instantly likeable. Having witnessed both channel their energies into the intense work sequence prior, consequentially drenched by sweat, hearing both performers speak is a joy. They both showcase a masterclass in how to collaborate and compliment one another with their performances. Dede’s Winston is jovial, he’s spritely, a light hearted presence taking each prison day as it comes. Springer’s John is centred, studious, driven by his love for classic Greek texts. The oppressing structure of apartheid, the sinister undercurrent throughout the evening.

Athol Fugard‘s text is incredibly and scarily resonant, it places the political into a personal context. Both protagonists are given their chance to speak, to allow for an audience to learn more about them. They are both preparing for a sharing of Antigone, which they’ll perform to the rest of the inmates. This sounds insignificant however is incredibly significant and powerful to watch play out. Robben Island has a dark history of injustice, and mirrors cases of today, where race relations affect the lives of many daily.

Terry’s production situates itself on a bare, square shaped stage with seats in the round. Sammy Dowson‘s set is reflective of the Greek tragedy soon to play out, the choice of an amphitheater layout is smart and powerful. The stage lines created by the cast are striking, each scene-photographic. Alexandra Stafford‘s striking white lighting exposes both performers, there is no place for them to hide in the initimate space. Terry directs a confined, a hopeful, a tragic, a heartbreaking- a nuanced piece of theatre. 4/5

The Island is currently showing at the Southwark Playhouse until Saturday 24th June 2017. For more information on the production, visit here…

« Previous post
All Or Nothing: The Mod Musical @ The York Theatre Royal Review
Next post »
Killology @ The Royal Court Theatre Review