All Or Nothing: The Mod Musical @ The York Theatre Royal Review

All Or Nothing is a musical about the mod era, written by Carol Harrison, and promises to be the coolest musical ever. It concentrates on the band the Small Faces and how they became the successful band they did, while focusing on the main character, singer Steve Marriot. 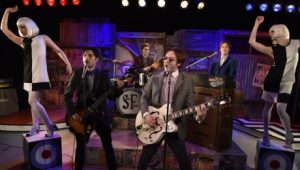 Courtesy of All Or Nothing: The Mod Musical website.

It starts with a rather cool older (44ish) Steve Marriot reminiscing about how it all started, whilst strolling along the stage taking the occasional swig from a bottle of something or other and puffing on a cigarette. You can tell by the expression on his face that his memories are fond ones when the young Steve Marriott appears on stage…

The story then moves on to how Steve was a disruption at school, to say the least, setting the school on fire, before working in a job that he clearly didn’t want to do. He wanted to sing and be famous and all that goes with it; money, girls, the lifestyle and most of all FAME. He was cocky, confident, a show off, and believed it was his destiny to be the best, a true legend.

The story follows with Steve meeting his, what is to become new band members, Ronnie, Kenny, and then Jimmy, who makes an entrance on the most beautiful scooter that makes the audience gasp with delight! The band go onto great things after being signed by Don Arden but with that comes a price. Firstly changing keyboard player Jimmy for Ian, which is okay with the other band members but also constant touring, gruelling schedules, pill popping and partying takes its toll and although having great success and a number one record, they have no money to speak of and realise they are being ripped off by Arden. Not only this but Arden insists they play mainstream pop music when the band want to stick to what’s in their hearts, R’n’B. This leads to conflicts and the band split from Arden. They return to making music which they love with offerings such as ‘Itchycoo Park‘ and ‘Here comes the nice‘ only too eventually split and go their separate ways.

The older Steve Marriott (Chris Simmons) keeps the audience informed throughout, reminiscing out loud whilst continuing to slurp on his bottle, which is evidently alcohol at this point slurring his lines perfectly.
The young Steve Marriott (Samuel Pope) is also very convincing as a slightly out of control youth and has a superb voice! In fact the band are great full stop! Much of the audience, including myself are smiling, singing and tapping feet throughout, and by the end of the show the majority are stood clapping along to songs and cheering loudly. Even outside the theatre people are praising the show and echoing the songs.

All in all, a first class performance and very cool musical! If the theatre Royal continue to put on shows like this, York is in for a real treat! 4/5

All  Or Nothing: The Mod Musical was shown at the York Theatre Royal from Tuesday 6th until Thursday 8th June. The show is currently on tour, for more information visit here…