The Merchant family are an entertainment powerhouse; Bollywood’s brightest, they have collectively choreographed, produced and composed some of Bollywood’s popular films. Not only have they added their touch of originality to hit projects, they have also brought together their talents to produce their own works. After their much loved The Merchants of Bollywood in 2014, the Merchant family return with their latest venture, Taj Express. 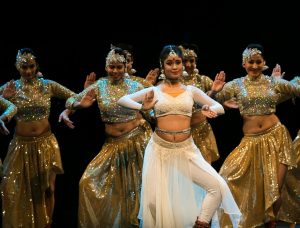 From the get go,it’s clear that the audience are in for a care free and light hearted evening. The calming tones of the voice over at the beginning informing all that the evening will feature many a Bollywood cliché is hunourous. This puts everyone at ease and unites. The evening’s premise is simple; a young and upcoming film director frantically works night and day to create the best Bollywood hit-Taj Express. The narrative acts as a framing device for the evening, adding heart.

Vaibhavi Merchant‘s choreography is the life force of the evening. Vaibhavi respects traditional dance forms but updates the evening with commercial and hip hop inspired sequences. The evening is adorned with choreography that continually ups the pace and keeps the morale on a high. Salim Merchant and Sulaiman Merchant contribute their expertise in musical composition with their upbeat song Roll the Credits. The evening celebrates the works of Bollywood’s musical greats, AR Rahman being most noted. Music’s role in establishing a mood truly celebrated here, allowing for all to really step back and take note of this component’s power.

Mikhail Sen‘s Shankar, a bright eyed, ambitious, people pleasing aspiring director is instantly likeable. Sen portrays a good hearted lead with plenty of charisma. Hiten Shah and Tanvi Patil are our Romeo and Juliet of the evening. Playing Arjun and Kareena Kaboom, they both bring Bollywood glamour to the evening, breathing life into Shankar’s script. The audience don’t hear much from the duo however this hinders a chance to truly connect. Many of the dances are about the duo individually showing off their skills, and isn’t about us learning about their idiosyncrasies. It’s a showcasing of a filmic art form known for its glamour, and successfully contains the gloss of Bollywood.

Chandan Raina on guitar, Prathamesh Kandalkar on percussion and Avadooth Phadke on flute are a dynamic trio. They all effortlessly bring the world of Bollywood to the stage with their renditions of well known hits. Raina, nickname Flash (in reference to Guns N’ Roses Slash) brings an edgy, rock fuelled tone to the evening, creating breaks throughout the evening for musical interludes. Bipin Tanna‘s costume designs brighten up an already vivacious evening. Costumes are beautiful and glamourous, adding an air of opulence to the evening. Shruti Merchant directs a fun filled evening packed with humour, romance and a feel good soundtrack. 4/5

Taj Express is currently showing at the Peacock Theatre (Sadler’s Wells) until Sunday 2nd July 2017. For more information on the production, visit here…