Synonymous with his collection of fables utilising animals as a means of symbolism, Rudyard Kipling‘s The Jungle Book has inspired the works of many. The fine line between us humans and animals has been a topic that will continue to fascinate. Drawing on Kipling’s narrative of a humab being brought up by a collective of animals, Alistair Wilkinson’s Man-Cub seeks to draw a parallel between this and a sexual awakening of a young male on a night out in Greece. 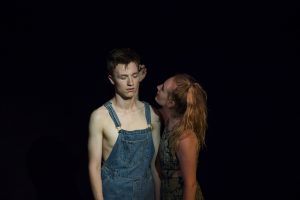 Rather than Mowgli having to navigate his way through an unforgiving jungle, an adolescent discovers a new, vibrant world in the heart of a raucous night club. The concept already is a fun one, there’s an immediacy between its predecessor and the narrative now playing out. The club is the evening’s jungle as it’s a case of working out new surroundings, instinct reigning superiority and survival of the fittest being key. Wilkinson perfectly captures the chaos and the sensuality of a night out by limiting speech to a couple of scenes (halfway through a cast member acts as narrator and the evening’s conclusion the protagonist gives his rendition of the night that just played out).

The evening is a sexual awakening, the protagist openly and confidently exploring his sexuality. Mainly played out through physical sequences, this further adds to the evening’s charm. From nervous man cub (played by Alex Britt) at the very beginning, to being care free by the show’s conclusion, the audience are witnessing a coming of age tale that’s real and that’s to be commended.

The show strongly depends on the energy of the ensemble. Group dances to an upbeat soundtrack of club classics maintain the evening’s pace. Stand out moments such as the man cub’s comical continual attempts to make it into the club, his first encounter with a potential ‘mate’ and the ensemble transforming into a giant serpent to symbolise seduction make for entertaining viewing. The evening’s motif of utilising physicality rather than speech is a great set up. The ensemble are sure to capture an adrenaline fuelled evening consisting of various shapes being thrown intertwined with snapshots of narrative however the concept of incorporating animalistic movements could be played around with a lot more. The show is honest, it’s relevant and a great way to start off a night out! 3.5/5

Man-Cub was shown at the Etcetera Theatre from the Tuesday 11th until Saturday 16th July 2017.