How a simple four letter word can be incredibly complicated? Love appears in various forms and guises, each individual interpreting it in their own unique way. Love is universal, No Offence Theatre creating a foundation of immediacy with their latest production, Torn Apart (Dissolution). 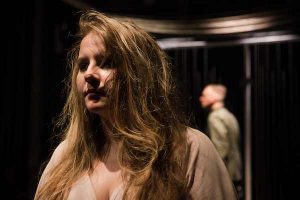 BJ McNeill writes and directs an ambitious script charting the ebbs and flows of three differing relationships, with thr intention of the audience investing in all six protagonists. Szymon Ruszczewski‘s cage-like set design compliments McNeill’s vision of really getting to know these individuals. The set is intimate, a bed situated centre of the stage sets the evening’s tone. The audience situated around the cage/bedroom aware that this production looks to break down barriers. The evening takes on an element of voyeurism, the audience, a fly on the wall observing the true realities of these couples. Nobody is perfect, and that’s a sentiment authentically echoed throughout the evening. Any inhibitions are quickly left behind as Nastazja Somers‘ Alina and Charlie Allen‘s Soldier in 80s Poland playfully strip and contribute the first sex scene of a few during the pre-show. The show tackles the taboo subject of sex, dismantling the Victorian attitude we currently hold here in the UK and present the topic with a care free approach.

Whether it’s Alina and her rendezvous with an American soldier in 80s Germany, Elliot (Elliot Rogers) and Casey (Christina Baston) in 90s London or Holly (Sarah Hastings) and Erica (Monty Leigh) in present London, it’s clear that love morphs throughout time into three different stages which are: the honeymoon stage, the complacency stage and sadly the dissolution stage. These stages are very relatable, no matter the individual experiencing them, however the script tends to overly explain situations, making scenes lengthier than they should be. There are attempts to synergise all three relationship arcs, however these links could be slicker.

Torn Apart (dissolution) slows down our fast paced world, placing an emphasis on the mundane and the things that might pass us by. It’s considerate yet bold. 3.5/5

Torn Apart (Dissolution) has its last performance at The Hope Theatre this evening. For more information on the production, visit here…