In 2008 as a group of scientists in Geneva were making decisions about the Large Hadron Collider, regular folk like us across the world were carrying on our daily lives, pondering at what it all meant and making mosquito sized decisions in comparison. 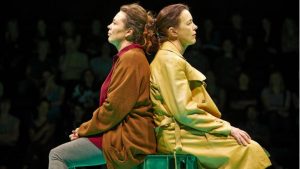 Lucy Kirkwood’s Mosquitoes is a story of seemingly inconsequential choices that analyses the impact that good intentions and heartfelt wishes have on the lives of the people we hold dear to us. Alice (Olivia Williams) is a passionately methodical scientist working on the Large Hadron Collider experiment. She plays the older, wiser sister to dumb, runt-of-the-litter Jenny (Olivia Colman) who will believe anything if it was written on Mumsnet.

Shadowing the two is a stern intellect of a mother who’s biggest gripe is missing out on a Nobel Prize to her husband, portrayed with sharp comic wit by Amanda Boxer. Shyly hiding behind a computer screen is Alice’s distant, awkward son Luke (Joseph Quinn), who engagingly captures the gangly frustration of a son trapped in the confides of his own intellect. As if these family members couldn’t seem anymore detached, the lingering memories of Alice’s estranged husband (Paul Hilton) form a cloud over everyone’s relationship.

Desperation trickles through the veins of Mosquitoes like hot treacle waiting for a hopeless victim to wade through. Devastating decisions, loosing one’s own agency and the absence of a child you could have sworn you were only trying to protect, no choice is left unscrutinised in this thudding piece of new writing.

Williams offers us a heartfelt portrayal of a successful mother confined by the making of her own success playing beautifully against the aggression and angst that Quinn brings to his role.

Colman delivers the dark humour of this drama so effortlessly, lines like ‘I’d rather be a racist than die in a plane crash’ trip off like poetry. Her ability to draw an audience in with laughter in one line and catapult them with her harrowing authenticity the next is the reason she is regarded a national treasure.

Rufus Norris’ direction of Mosquitoes makes great use of the arena staging. The stage transports from science lab to living room with clinical precision from the supporting cast matched with punching sound design from Paul Arditti’s.

There are a lot of narratives at play in Kirkwood’s piece, which at times makes some plot devices seem illogical. Secrets and personal issues form like strings holding the characters together, only to be left frayed and unanswered by the curtain call. This play packs a punch, but there is more unpacking of emotional baggage from minor characters which waylays the journey for the sisters.

A question looms over the play ‘does science ever meet raw emotion?’ With events like the recent Charlie Gard case, Mosquitoes calls us to scrutinise our emotional capacity to make decisions against moral and scientific judgement. Kirkwood intelligently probes this and then argues whether science is all but baffling lingo, a mind boggling way of executing power over the dumb and ill-informed. 4/5

Mosquitoes is currently showing at the National Theatre until Thursday 28th September 2017. For more information on the production, visit here…

« Previous post
Writer & Director Ade Berry talks about his show From Ibiza to the Norfolk Broads!
Next post »
Win a My Ebony Box gift box!