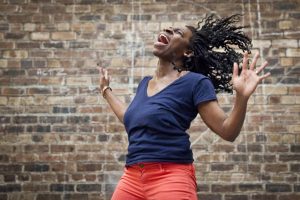 The term ‘woke’ refers to an awareness of the injustices that affect those within a nation, community or on a global scale. It’s fair to say that within the past 5 years, thanks to the advancement of technology there has been a conscious effort to document the wrong doings of those particularly within authority. Apphia Campbell’s WOKE explores the struggle for a fairer society through the eyes of two contrasting women. Read to find out more…

Hi Apphia! Your latest show WOKE will be performed at this year’s Edinburgh Fringe Festival. How are you feeling ahead of the run?

I’m feeling fantastic! We had a preview last week at the Canal Café, and the response was really positive. I’m so proud of this piece and I can’t wait to share it with everyone during the fringe.

WOKE is a one woman show telling the story of two women, 42 years apart, involved in the struggle for civil rights. What drew you to create a show on this particular topic?

I have been having more of a political awakening and I believe it’s due to the times that we all find ourselves living. I watched the documentary 13th last year by my shero Ava Duvernay, and I felt inspired to learn more about the Black Lives Matter movement. She mentioned Assata Shakur, whom I was introduced, through my friend’s senior project in college. I kept seeing so much happening in terms of government trying to suppress a democracy that they no longer understand or can control. I thought it was really important to study the past and link it with the present so we know which direction to move forward.

What was your process for creating the show?

A friend of mine had written this show called, Poems from the Underground which was her senior project when we graduated from college. I always loved her piece and kept asking her, “When are you going to perform the piece?” She didn’t plan on performing the work, so I asked her if I could adapt the piece. The first thing I did was go and re-read Assata Shakur’s biography. As I read it, there were passages that you could take from her book, change the locations and dates, and they would apply to modern day America. I knew I wanted to tell a story using present day America, and I wanted an audience to look at the situation through fresh eyes. That’s when I sat down with my writing partner, Meredith Yarbrough, and we came up with the secondary character; Ambrosia. Ambrosia sees the world innocently because she’s never experienced injustice. We thought it was really important for the audience to have this character they can connect with juxtaposed to this political activist. We hope creating empathy brings about change.

I hope the audience walks away with a new idea about how political activists are being portrayed and also wanting to become more engaged themselves.

WOKE is described as telling the story of the African American experience. In the 42 years that your show spans, do you believe that there have been any changes politically and societally?

Absolutely, there have been so many positive changes but there is still work to be done. My father told me to remember to focus on the positive changes that have occurred. We aren’t in segregated schools, restaurants, etc. We have so many more opportunities than we did in the past. While I agree that there is much progress that has occurred, we have to be alert to old habits resurfacing under new laws. This is why it was such an eye opening experience for me to see the documentary and really observe what was happening in America. So, that I know how to help make a change.

WOKE focuses on the voices of 2 African American women; Tupac Shakur’s Aunt and Black Panther member Assata Shakur and a current day student starting at uni during the dawn of the Black Lives Matter Movement. Why in particular these 2 voices?

With it being Assata Shakur’s 70th birthday, and seeing the resemblance between past and present, I thought it was really important to tell her story again. People need to be reminded of the true circumstances to her exile and also know that when you see someone being criminalized there are always two sides to the story; history is written by the victors. Also, you don’t hear a lot about women in these movements and I think it’s really important that a woman’s voice is heard. The Black Panther women were some of the most dedicated in the movement; yet, you only hear about the men. So, I wanted to make sure the female’s voice was heard.

If you feel like you have a story to tell—don’t be afraid to start writing it down. I heard someone say that there is no such thing as writers block, it’s just you haven’t fully worked out the full story yet. Go back to the drawing board. Don’t be afraid to ask for help! Criticism is hard, but essential.

WOKE will be showing at this year’s Edinburgh Fringe Festival (Gilded Balloon Teviot) from Friday 4th until Monday 28th August 2017. For more information on the production, visit here…