Dust is an illustrative and graphic portrayal of a suicide fuelled by depression, drugs, lust and sex. A complex narrative which moves between ghost and living bodies, existing somewhere between the living and the dead. Playwright, performer and self-confessed ‘chronic oversharer’ Milly Thomas, engages us in her dark yet empathetic story. 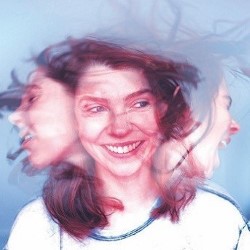 Alice thinks this is the end, she’s been dead for three days but with the ability to witness the continuation of life, she is forced to watch the aftermath of her suicide. Spectating its ripple effect on her family and friends, Alice quickly learns that death changes people and that death isn’t the change she had hoped for.

A far reach from naturalism this show has no boundaries, it is fearless in its writing and direction. The piercing noises and flashing lights propose a tactility of disorientation, compounding Alice’s fear and eventual remorse. Set to disorientate whilst uncovering the affected physical experience of a ghost perceiving everyday life, this appears disturbing. Milly wearing a dystopian beige body suit, expresses Alice’s turmoil enveloping the world around her which in time reveals twists and turns. Moving with fluidity and pace, Dust, whilst focussing on Alice’s experiences also presents the people left behind, the witnesses and observers. Whilst being Alice, Milly flicks between multi-rolling as family members and friends, showcasing intricate physicality.

Often concerned with the big picture this play at times fails to recognise the specifics. With a focus on the affect of Alice’s death the audience are left questioning the reason. Although details of Alice’s depressed nature are explored, this often feels distant and nowhere apparent in the ghost of Alice. I find myself questioning ‘how different is an internal voice to a public perception?’ and at ‘what point do we lose ourselves in death?’. As a ghost it seems Alice has lost everything that absorbed her living life, with little reference to her mental health in her ghost form.

Graphically enhanced in the cold, dank venue of the Big Belly nuanced set made only of metal, references the uncomfortable nature of death. Whispered transitions and unpredictable music, exposes you to the unreachable. Deteriorating as her remorse grows and returning to the metal trolley, empathy finally resides with Alice after sharing it with all other characters first. I leave the production struck by the feeling of being exposed to Alice’s deathly experiences. 3.5/5.

Dust is currently showing at The Underbelly until Sunday 27th August as part of this year’s Edinburgh Fringe Festival. For more information on the production, visit here…