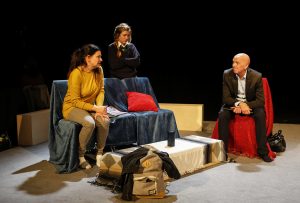 Following a hugely successful UK tour and returning to the Fringe after 25 years of being away, Cardboard Citizens bring a reality to the festival. Staging the impact of spiralling housing costs, gentrification and the challenges of forced relocation, Cathy is a show that is important for the diverse audiences of Fringe to witness. Directed by Adrian Jackson, this is a real story cleverly told and performed with naturalistic honesty. At times hard to watch, this is the brutal reality of the world faced by many of our population.

Cardboard Citizens pride themselves on telling stories, aiming to create theatre which makes a real and positive difference to society and those living on its margins. With their community centred approach evident in Cathy, we hear from the people this real issue is affecting, we see their faces and hear their voices through the use of multimedia. Symbolic blocks are turned over and moved to create the set for this fluid piece of theatre. Representing the obstacles and barriers in the journey Cathy is forced to make, the white blocks beginning as a Jenga Tower end up symbolically kicked and tossed. Naturalistic lighting and costume bring the story to life, which touches on a lot more than the existential homing crisis.

Cathy Owen performing the title role is courageous, in sheer desperation she pleads with anger igniting an audience of allies. Daughter Danielle, Hayley Wareham, strikes the needs of a teenager, whilst battling between torn parents. Multi-rolling Amy Loughton and Alex Jones, showcase a multitude of characters from the despicable who tear Cathy away from her estate based heritage, to the attentive Arriva Trains attendant. This cast perform characters which the audience believe in and post show fight to save, devising a list of legislative laws that should be in place for people experiencing the same as Cathy.

Change is never easy, but with the action of Cardboard Citizens and viewing audiences, subjects can be discussed and alternatives can be explored. I leave the production strongly recommending that Cathy is added to your list of shows to see at this years Fringe. 5/5

Cathy is currently showing at The Pleasance Dome until Saturday 26th August 2017 as part of this year’s Edinburgh Festival. For more information on the production, visit here…