Excess is success in writer-cum-actor Ed Brody’s piece of new writing Penthouse which attempts to discuss issues of ownership, overindulgence and gross over estimations. 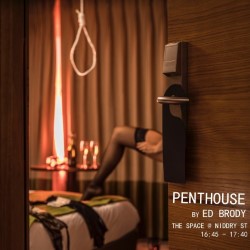 After fucking up the UK’s financial system, young banker Ewan (Brody) hires high class escort Eloise (Catherine Lamb) for one big blowout night with colleague Danny (Dario Coates) and drug dealer Drew (Ryan Hutton). However, it’s not just Ewan who fails to ‘get it up’ for Eloise, this play quickly turns flaccid without even trying.

Brody approaches his character with the right amount of melancholy, yet as a writer never fully explains the story behind the premise of the script. Coates carries this text well, bringing an often comic, macho-city banker vigour to the misogynistic character of Danny. Coates roars Danny’s line of ‘I’m still paying you’ opening up the discourse surrounding subjectivity and sex work. Hutton bounds about on stage with a peculiar 21st Century Rodney Trotter-esque glee. He rouses a playful humour, but the character serves very little purpose to the plot.

Sex work, as I can only imagine, must be excruciatingly boring and Lamb adds an appropriate level of tediousness to the curiously questioning Eloise. When faced against the red-blooded ignorance thrown at her by the lads, Lamb delightfully fires Eloise’s come backs like warning shots, walloping the air with a feminist thump. Brody clearly knows what he’s trying to grasp in this script but these engaging moments need a real hard shot of something strong to really get the spirit of the piece going.

Director Kate Williams uses a short movement sequence to shift the night along but perhaps this could be employed further to reinforce the sensation of a ‘total blowout’. At just over 35 minutes this piece feels like it is cut far too short or something is missing in this run. Drama juts in too abruptly and ends unconvincingly, not to mention the implausibility of these super rich bankers drinking Gordon’s gin!

Brody needs to take the shining moments of Penthouse and string them together to make a more complete and tied up piece. A singular message needs to be catapulted throughout and pumped with more realistic gluttony and grit. As a Fringe premier he’s got time to rehash, get it right and he’s on to a corker but at the moment this blowout is one heck of a downer. 2/5

Penthouse is currently showing at theSpace Theatre until Saturday 26th August 2017 as part of this year’s Edinburgh Fringe Festival. For more information on the production, visit here…