Jelly by Mica Mono opens at the Cockpit theatre on 5/8/17 as part of the Camden Fringe. Written by Eugenie Abbott, the play revolves around the effects of drug abuse on the vulnerable and whilst it is set in the future with the mysterious drug ‘Rosy Grey’, it is clear to see its relevance to our own society where for some, drugs are the only way of escaping reality, however temporarily. 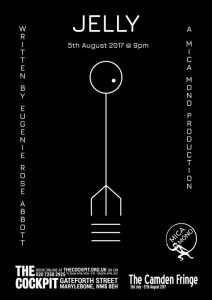 The treatment of the issue is sensitive and seeks to show some of the insanity without judgement. Tom Stocks plays Jacob, a recovering addict, particularly well and his commitment makes it a pleasure to watch him tread the boards.

Mica Mono creates a strong visual world of an uncaring dystopian society; a minimal set with a lone barrel of drugs centre stage left, no illusions as to what their society revolves around. Their world is enhanced by a brilliant soundscape by Peter Weston which allows us to follow the characters in and out of trips and sobriety. This is hard to keep up with, though, and with several characters all at varying levels of ‘high-ness’ it is at times too much to follow, although it could be said to have achieved a disorienting affect similar to that of drugs. The fact that the drug makes the user speak in verse only adds to the confusion and I find myself wishing the cast would give more attention to detail with the text. I don’t doubt the material to be well written, but I need to understand it to follow the plot.

Bianca Beckles-Rose plays the lead character, Sita, and the setting of Mega City is occasionally punctuated by flashbacks from her past; small hints of climate change and a refugee crisis are made in a tasteful manner and leaves the audience some food for thought as to the possible contributing factors of drug dependency. I am impressed by this subtlety and rather glad to be spared a Cumberbatch-style rant on the subject.

Finally, I must mention the ‘Jelly’; some sort of presence or deity that exists beyond our everyday perception or maybe just the hallucination of a drug-addled mind. Somehow (with or without drugs) Sita and Jacob eventually manage to find and confront it, although there is no real interaction and it cannot be said to have any clear influence on the plot. I am left feeling confused as to why such emphasis is placed on something that barely features in the play. Still, perhaps the audience will leave questioning whether we are really aware of everything around us, or are there planes of existence that ‘Rosy Grey’ or even our own cynicism prevents us from experiencing. 3/5

Jelly was shown as part of the Camden Fringe Festival on Saturday 5th August 2017. To find out more about the production, visit here…