Robin Hood at York Theatre Royal delivers a bustling display of archery and slapstick comedy, yet at points falling a little short of the target. With a quirky new take on the traditional Sherwood story, writer Richard Hurford displays Robin Hood as a lame, slightly awkward young man barely able to hold his own in a hand wrestling contest, let alone stealing from the rich and giving to the poor. 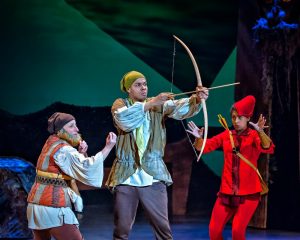 Exceedingly poor himself Hood must be trained up by, as surprising as its sounds, Maid Marion, yes I know a bit far fetched, but apparently a secret stick wielding, butt kicking Bond girl who disguises herself as a man to aid her thought-to-be hero. How disappointed she must have been.

The piece charms with a musical score as long as your arm and a set of well placed puns that although, tickling upon the sexual and inappropriate, utilises the audience to their advantage. On a cheese level, well, Friar Tuck should be promoted to the stinking bishop; Yes, jazz hands, flamboyant outfits and even a bit of cross dressing to mention only a few. Joanna Holden, who plays the role of Little John, is by far the stand out performer during the performance and oozes comedy value, mixed with a lovable personality and childish innocence. The relationship between herself and Tuck (Trevor A Toussaint) adds another layer of absurdity to this piece and makes the family friendly vibe Hurford seem to strive for a success.

Unfortunately however the piece does have its ‘exit stage left’ moments and does allow the audience to drift off and make one question the choices the director and cast have chosen to input into the performance. Firstly, the backing track used to accompany the casts singing is a tad too poppy and does give a sense of a drunken karaoke night, which I don’t believe the musical director is hoping for. As mentioned, the story, although quirky, does not hit home for many due to its overload of humour and there not being enough of a connection to the original story. Besides the characters, this piece is following a different plot entirely from the original, forcing one to re-read and question the shows title.

Overall, a fun filled night of frills and frivolities that will put you in a good mood, even if York decides to rain none stop from dawn until dusk on that particular day (trust me, I know). Although, some areas will leave you confused as to the storyline and why perhaps there is a giant serpent present in act 2, just try and role with it. Robin Hood and his young merry men do however generate a love and passion for their craft and that does deserve real credit. Pleasant and inviting for the whole family! 3/5

Robin Hood is currently showing at the York Theatre Royal until Saturday 2nd September 2017. For more information on the production, visit here…