Picture the scene, it’s the 1950s and a new wave of music is taking the world by storm, toe tapping melodies, poetic verses, catchy choruses,  upbeat singing tones… it’s the era of manufactured pop. Thousands upon thousands of screaming fans await the arrival of the latest pop phenomenon of the moment as they disembark from a plane or take to the stage. These iconic images will forever mark out the beginnings of pop culture for many years to come. 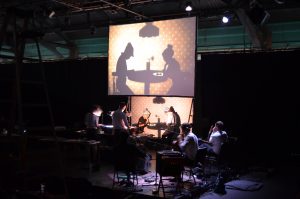 An age pre-social media, the emergence of pop harks back to an innocent time musically and Manual Cinema‘s Lula Del Ray captures this. From the very moment the audience step into to the Underbelly Med Quad, it’s as if they’ve stepped into to a time machine, destination-1950s America. The narrative is a simple, yet endearing one. A young girl, living on the outskirts of a vast satellite field discovers a love for the hottest pop band in town, the Baden Brothers. Driven by her new formed appreciation of the band, she embarks on a journey to the city to watch the band of the moment live.

With the absence of dialogue, Manual Cinema expertly depict a filmic landscape like no other. Shadow puppets and overhead projector projection are meticulously timed to establish the actions and reactions of our screenplay cast. Sarah Fornace (Lula Del Ray) and Julia Miller (Lula’s mother) add heart to the production. Their interactions depicting the ebbs and flows of a mother and daughter relationship, stubbornness yet unconditional love from both parties the crux of their relationship. As our protagonist is consumed by her dreams of watching the band live, we to are entranced by the dream like atmosphere created. Snippets of the Baden Brothers track of the moment serenades both the lead and the audience, the track symbolising her wanting to seek new horizons. Puppeteers Sam Deutsch and Drew Dir seemlessly bridge the gap between Fornace and Millers real time performances and the shadow puppet versions of these characters.

Kyle Vegter and Ben Kauffman‘s sound design is slick. Married with live musical accompaniment performed by Maren Celest, Michael Hilger, Eric Streichert and Alex Ellsworth, Lula Del Ray embodies an ambition and scale that marks this production out as one of a kind. Lula Del Ray is the perfect union of narrative and creativity. The show’s retro feel pays homepage to an influential time. The narrative is understated, and this contributes to the show’s charm. Lula Del Ray achieves quite an astonishing feat of harking back to yesteryear yet pioneering a form of theatre that will shake up our theatre scene in years to come! 5/5

Lula Del Ray is currently showing at the Underbelly until Monday 28th August 2017 as part of this year’s Edinburgh Fringe Festival. For more information on the production, visit here…