Ganesha is one of the most revered deities in Jainism, Buddhism and Hinduism, with his image widespread across India, Sri Lanka, Thailand and Nepal. Renowned for his elephant head, he is regarded as a source of wisdom and intellect. Aligning with Ganesha Chathuri, a Hindu festival celebrating Ganesha, Yuki Ellias‘ Elephant in the Room plays homage to a small but very enthralled crowd in Edinburgh. 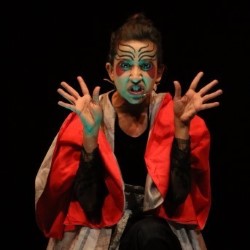 Ellias constructs a mythical tale filled with adventure. The intimate setting of Venue 20 absorbs the scale of Ellias’ narrative. The son of a king, Master Tusk finds his world turned upside down as his villainous father sends for his beheading. In replacement of his human head, an elephant head rests. Half human, half elephant, Master Tusk finds himself lost in a new world, a forest teeming with secrets.

Ellias’ ability to enliven the theatre with her unrivalled charisma is a pleasure to witness. Taking on a array of characters, she brilliantly shifts from melancholic prince, to spritely spider, Makadi to mischievous poacher, Moork, Ellias grips with her infectious stage presence. Having trained at the Jacque Lecoq School of Theatre, Ellias creates her own physical language, the show is a masterclass in how to portray character through quality of movement.

With the assistance of her costume design, a reversible robe creates the illusion of elephant ears-grey on the outside and red on the reverse. Once reversed it’s vice versa-the redness of the robe symbolising royalty. It’s this simplicity of costume and props that make the production even more magical. The evening’s sound design further delves the audience into the unpredicatablr forests of India and also establishes a feeling of mysticism. Ellias’ tale is heartfelt, she crafts a narrative drawing on animal symbolism to highlight the complexity of human emotion. She ring leads our morales, she possesses the ability to invoke laughter one moment, and draw tears the next.

The Elephant in the Room isn’t purely a mythical tale dealing with characters in a far away land, rather it draws on the human condition with such prowess that Marks itself as an Edinburgh Fringe highlight, it’s a hidden gem of a show. 5/5

Elephant in the Room was shown at the Assembly Rooms from Thursday 3rd until Saturday 26th August as part of this year’s Edinburgh Fringe Festival. For more information on Yuki Ellias, visit here…

To find out more about Teamwork Arts, visit here…