The year is 2014 and the world is alerted to one of the most disturbing stories of recent times. In Chibok Town, Borno State, 200 girls were kidnapped and held hostage by an Islamic militant group by the name of Boko Haram. Years have passed, with some of the girls having been returned to their families, however the whereabouts of many still unknown. 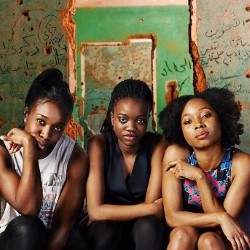 A narrative that appears fictional from the outset, it is unbelievable how a situation such as this could have occurred. Incensed by this atrocious episode in recent history, Theresa Ikoko penned her award winning show, Girls. A piece steering away from the media’s gaze, Girls solely focuses on the uprooted lives of three young females, who have forcibly had to assimilate to a new doctrine. Clueless as to when or if they’ll ever be freed and returned to their families, all these trio of girls want is to survive.

Ikoko delivers a piece so visceral she is deserving of the acclaim and awards that she has received. She has an ability to shy away from the obvious route of showcasing the narrative through the media’s gaze and etches out the lives of three young females just trying to get by. Girls is a story of survival and these three strong female characters, all with the shared intention of escaping their captors, carve out three completely different ideologies as to how to achieve this.

The situation these characters find themselves in is incredibly dark, however Ikoko is able to find light via their will power and spirit. Topics such as sex and relationships create a source of comedy, the blase nature in which these characters discuss these topics bring to home just how young and normal these characters are. Issues such as religious conversion cause friction amongst the trio, having being forced to follow Islam. This creates a gateway for the audience to form their own opinions on one’s own personal belief systems and ideologies.

Talawa‘s production further fleshes out the dynamic of our leading trio. Heather Agyepong‘s Haleema embodies a steel like no other, Yvette Boakye‘s Ruhab is the anchor embodying a maternal presence and Yasmin Mwanza radiates the space with her unrivalled optimism. Girls is a coming of a tale set in a scarily out of the ordinary situation. The audience never witness their captors, their presence limited to the anecdotes of the cast and rightly so. These girls are given a mouthpiece allowing them to air their own views, the audience get to view and listen to their thoughts, their concerns, their hopes and that’s to be commended.

Girls is a story of womanhood, we watch these young women mature emotionally before our very eyes. These girls are heroes in their own right; this is a fresh and enlightening piece highlighting the ordinary in an incredibly out of the ordinary situation. 5/5

Girls was shown at the Pleasance Courtyard from Tuesday 22nd until Sunday 27th August 2017 as part of this year’s Edinburgh Fringe Festival. For more information on the production, visit here…