Memory is a powerful thing. To have the ability to replay a situation, particularly a treasured memory is powerful. Memories can be the only thing, and perhaps the most powerful thing a loved one can leave behind to maintain their legacy. I her debut one woman show, Nicola Wren explores the power of memory. 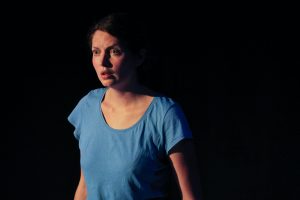 Replay, written and performed by Wren attempts to unearth the hardships that have gone onto mould our protagonist into the tough skinned individual she finds herself being today. A police officer by day, our protagonist is constantly on the front line, forced to keep calm and carry on, even if she finds herself in a tough situation. However, what happens when a life changing event within the family forces her, to momentarily have her guard down?

Wren’s piece touches on the sensitive subject of suicide, as our protagonist constantly replays the day her older brother sadly took his own life. This tragic moment offers a stark contrast to her daily life of responding to the needs of others. Here, she is the one in need of support. This replaying of memory is the play’s crux, it is the foundation, alongside the anecdotes she tells that form the foundations of Replay. There is potential for this contrast to truly hit home, but it doesn’t quite. Our protagonist speaks of her older brother and with this makes apparent how crucial a part he played during her childhood. He carries an emotional weight that has the power to strike a chord, however has the potential to be fully realised.

Wren guides the audience through her memory via anecdotes, from an interview going terribly wrong and resulting in a bout of food poisoning causing it’s abrupt end, to her reminiscing about a childhood game (think Simon Says) created by her brother and herself consisting of the pair sitting down every time the song of the same name would repeat the lyrics ‘sit down’. Wren utilises this song as an evocative convention, the song symbolising her bond with her late sibling. This offers a sense of fun in a play tackling a weighty topic.

Replay features a strong female lead taking on her most challenging obstacle of retaining a positive memory of her late brother. Wren beams with confidence, and now needs to equal this with a vulnerability that will guide all on an emotional rollercoaster. 3/5

Replay was shown at The Pleasance from a Wednesday 2nd until Monday 28th August 2017 as part of this year’s Edinburgh Fringe Festival. For more information on the production, visit here…