Gender is a topic that has really gripped the West in recent years. A societal construct, gender has been placed under the microscope and analysed, with ideas being challenged and redifined. Gender forms a part of our identities, who we identify as most definitely shapes how we are seen and treated by others. 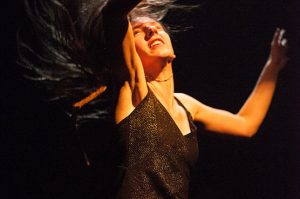 201 Dance Company‘s Skin delves into the complex topic of gender and transitioning. Tracing the very beginnings of a young girl’s yearning to become a boy, the audience watch as she battles against a judgmental mother adamant on her embracing her feminine roots. Drawn to spending her time with the boys and mimicking their behaviours and movements, it’s a case of following her heart, and hopefully gaining her mother’s acceptance.

Michaela Cisarikova takes on the lead, a woman living and breathing each and every moment of her life yearning to become a man, her every movement delivered with such weight depicting the emotional pain she constantly jostles with as well as the external pressures of society. Lily De Jong takes on the role of her younger counterpart, reluctantly mimicking her mother’s (Lara McCabe) typically feminine movements. With this, choreographer Andrea Walker is mindful of depicting the beginnings of our protagonist’s want to transition. McCabe’s convention of utilising whacking as a means to display defiance against her daughter’s decisions make for interesting viewing. This is a creative choice that has the potential to be explored further. We witness the younger version of our protagonist defying her mother’s expectations but there’s room to depict the rollercoaster of emotions she must be experiencing.

Cisarikova Contributes a visceral performance,   vocalising as she performs sequences. This intensity is felt by all in the space however it sustains the same energy and not offering a change in pace. The subject matter tackled is a multi-faceted one, showcasing a young and adult version of our protagonist is clever but would benefit from nuance and really breaking down the emotional struggle of the lead.

201 Dance Company present an ensemble dance piece, Luca Catoggio, Valerie Evie‘s, Maximillian Larish and Amy Lucas establishing the show’s combative energy. The external pressures our lead faces, they are partially the cause of the lead’s weighty performance. Enigmatic, the ensemble act as a silent chorus, their intentions – although antagonistic would benefit from clarity and purpose. 3/5

Skin was shown at The Pleasance Courtyard from Wednesday 2nd until Monday 28th August 2017 as part of this year’s Edinburgh Fringe Festival. For more information on 201 Dance Company, visit here…