Post show, performer and co-creator Aditya Roy explains the importance of handing over an offering to an individual within one’s life who has guided or taught them in a certain field. His one man show, The Offering – an offering to his many martial art gurus offers a touching note to a fast paced, all kicking, all conquering show. 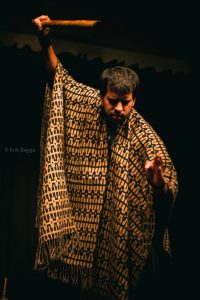 Aditya Roy, along with Puneeta Roy bring to Edinburgh a tale of courage, perseverance and strength. The Offering‘s inspirations drawn from the very performer’s two decades worth of training in martial arts forms the basis of the minimalistic show. Roy is our storyteller, his words alone transport the audience to an unpredictable setting of a bustling forest. It’s his command of his self penned story that has the space engaged. Roy effortlessly takes on the boisterousness of a young warrior, fearless of the obstacles yet to face him. Straightforward in it’s approach, The Offering serves up the morals of working hard to succeed and good triumphing evil. The show is feel good, simplicity acting as king.

Drawn into a deep, dark forest, a young warrior defies expectation, performing Herculean tasks much to the surprise of his guru and which would ultimately aid him in saving his guru from a villainous being. Roy displays his knowledge in martial arts with the incorporation on sequences through your the production. From certain stances he utilises to routines he performs, the respect in which he holds these skills he embodies is high and makes for a thoughtful watch.

Musical accompaniment is held dearly in The Offering, a serene soundtrack underscores the 50 minute piece. In effect, this is calming and further delves the audience into a world of adventure and thoughtfulness. Roy also utilises a wind pipe as both his weapon in combat, as well as an instrument adding to the show’s musical language as music as an accompaniment and also music as a voice. The Offering is storytelling at it’s most purest. 4/5

The Offering was shown at C Venues from Wednesday 2nd until Monday 28th August 2017 as part of this year’s Edinburgh Fringe Festival. For more information on the production, visit here…