New York. A city of hostility, filth and rotten matters. Yet it is also a place full of glamour, sequins and booze. It’s a spectacle of sorts. As another theatre closes down, old flames come together to celebrate the glorification of the American girl. Stephen Sondheim‘s Follies is a story of reminiscence. 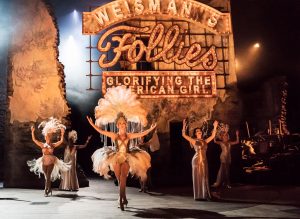 Visually it is fantastic, and designer Vicki Mortimer has created a set that is not only aesthetically pleasing, but practical too. Dominic Cooke‘s scene transitions seamlessly serve the narrative well and his direction has many moments of ingenuity. Alongside this, innovative choreography from Bill Deamer make Follies a real treat to watch.

In her role as Sally Durant Plummer, Imelda Staunton triumphs. Sally is charismatic and bubbly, and Staunton’s ability to command full attention on stage is impressive. Her vocal range is at an exemplary level, and the control she demonstrates during her performance deserves a lot of praise.

The supporting cast maintain the same professional standard, and each has their own moment to shine. Janie Dee’s Phyllis Roger Stone is cutting, sarcastic and alongside her husband Benjamin Stone (Philip Quast) radiates privilege. Peter Forbes, who plays Sally’s husband Buddy Plummer, is equally as antagonistic as the other three, and all actors work together to effectively put across the quartet’s toxic history.

The ensemble are leads of their own, and whether it be their rhythmic tap numbers or emotional ballads, they each take their position as imperative members of the cast. It is no easy task to stand alone on the Olivier stage and simply sing, but each performer takes it in their stride, delivering soul and power.

As the show draws to the end it loses its pace. The solos become predictable, and occasionally the energy dips. However, it resumes its sensation in its final number, and we are reminded of the casts performative power.

Follies makes you consider the person you’ll never be. It is a celebration and is very deserving of its numerous thunderous applause it receives throughout. The production is a masterclass in how to do musical theatre well, and the 135 minute experience is one of pure joy. 5/5

Follies is currently showing at the National Theatre until Wednesday 3rd January 2018. For more information on the production, visit here…