Based on the ancient legend of Heer and Ranjha, it is sometimes referred to as the Romeo and Juliet of the East. It is a tale of absolute and pure love (ISHQ) that triumphs over cultural and class barriers, although just like Shakespeare’s classic, audience members are in for a tragedy rather than a ‘happily ever after’. 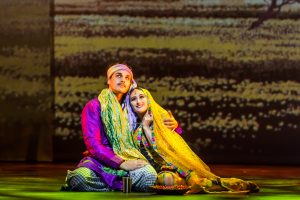 The longevity of the story attests to its validity and appeal, but how was this story manifested into the first Anglo-Punjabi musical of its kind? Unfortunately, this is where the show fails. Original story aside, the only perceivable connections to Pakistan are in the costumes. I would have thought Peter Brook’s Mahabharata would be the first point of reference for those aiming to bring a subcontinental epic to the West, but unfortunately this show is less a large scale experiment in intercultural theatre and more a simple transplantation of an Eastern story told with the mundane technique of a deadly West End park-and-bark.

On the whole, the acting is below par and lacks conviction. Some characters are too small while others are larger than even the worst pantomime villain. I can accept the melodrama, even welcome it if it stems from a relevant cultural precedent, for me the problem lies with inconsistent direction. Still, Heer (Rashida Ali) gives an all-round good performance with lovely vocals and beautiful movement that really catches the eye. In fact, movement is one of the few areas where a cultural cross-fertilisation takes place, possibly down to the endeavours of choreographer Suhaee Abro who is trained in classical Indian dance.

The music, (save two laudable exceptions – see below) suggests nothing of the rich musical traditions of Pakistan; instead we are subjected to the type of flouncy musical numbers that would seem more at home in High School Musical than the mystical world of Islamic Sufism. However, Kansia Pritchard makes beautiful music with his flute, indeed, playing from the wings while an actor mimes unsuccessfully on stage is an insult to his talent. Why not, as in numerous other South Asian theatrical forms, bring him out in full view of the audience? Similarly talented is the traditional drummer who brings some life and authenticity to the proceedings, a pity, then, that he is merely a cameo that covers a scene change. Given time and freedom I believe these two musicians could underscore the whole show dealing equally in joviality and melancholy when required.

The visual world incorporates some beautifully painted projections but overall, this epic simply demands more depth and atmosphere. The text has potential but the shallowness of the production prevents a meaningful experience. On the positive side there is an exploration of some topical issues; the show highlights Islam’s little known Bohemian side (Sufism) and touches on the honour killings we still hear about in the region, however, the important substance is masked by the glitter whilst the migration of the story should be an invitation for other cultural baggage (music, performance technique, ritual and language) to follow, unfortunately they do not.

The show marks 70 years since Great Britain gave Pakistan her independence, but rather than a patriotic celebration of Pakistani culture and achievements presented in a Pakistani way, we get an imitation of a Western musical. In what I suspect is a huge miscalculation, they supress their own culture to avoid alienating the Western audience; unfortunately, the loss of the exotic makes me lose my interest. 2/5
Review written by James Jack Bentham

ISHQ is currently showing at Sadler’s Wells until Saturday 9th September 2017. For more information on the production, visit here…