Woyzeck in Winter @ The Barbican Review

It is clear that a storm is brewing in Conall Morrison’s adventurous Woyzeck in Winter as white confetti-like snow drifts across a beautifully crafted set of old dismantled pianos. This adaptation at the Barbican sees Morrison match George Buchner’s original unfinished script Woyzeck with Franz Schubert’s song cycles Die Winterreise originally composed in response to Wilhem Muller’s poems of the same name. 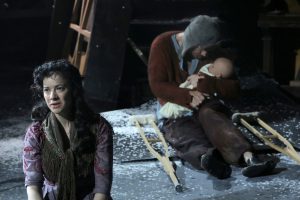 Chronically over worked and under paid Woyzeck (Patrick O’Kane) does all he can to make ends meet for his baby and Marie (Camille O’Sullivan), the mother to his child. At the hands of a society that does little to care for the working classes, Woyzeck becomes the village idiot offering himselfBarr up to any work he can get his hands on. Eating a diet of just peas for an experiment with the local Doctor (Barry McGovern) and being chronically undermined as barber to the Captain (Stephen Brennan) all of these low paid gigs have a hauntingly real reflection of the gig-economy that cripples so many people’s lives in the UK.

Rearing a child out of wedlock and living in insufferable poverty takes it’s toll on pitiable Marie who seeks solace from Woyzeck’s psychological instability by engaging in an affair with The Drum Major. O’Sullivan plays the part with a husky Irish lilt, adding a much needed sobriety to the character. This compliments well to O’Kane’s depiction of Woyzeck as a man rushing through life trying to defeat his intrusive thoughts.

By far the most spectacular element of the piece is Jamie Vartan’s mightily impressive set which forms a vignette of countless pianos that have seemingly collided to frame the stage. These pianos symbolise the poetic beauty of lust, love and loss against the blots of discordant destruction that plague Woyzeck’s life. Ben Ormerod’s lighting design plays beautifully to the wispy bleakness that shrouds the atmosphere of the piece. Costume design by Joan O’Clery adds a flirtatious dose of 19th century period romanticism.

Connor Linehan’s refreshing accompaniment acts as a metaphor to Woyzeck’s disillusioned mind. However the 24 movements to Die Winterreise often seem out of kilter placed next to the 24 scenes from Buchner’s original text. On first reading this coupling of two eminent works by artists who died tragically young seems indisputable, but something about this production seems to jar.

Disappointingly this paring of Buchner and Schubert never quite reaches the crescendo that it promises to be. Ensemble scenes feel pallid and lacklustre meaning this piece rarely meets a sizeable climax.

The fragments of work that we are left with today were at the time contemporary and cutting edge, but the question that looms over this production is whether this adaptation offers a similar contemporary response to the world we live in now. 3/5

Woyzeck in Winter was was show from Wednesday 13th until Saturday 16th September at the Barbican. For more information on the production, visit here…