The thought of not having rehearsed a piece before performing it sounds daunting, surely? A typical stage in a production’s process, the notion of omitting this crucial process sounds absurd or depending on how you look at it, could make for incredibly exciting theatre. Nassim is a play text that demands an alternative approach, its playful structure-seemingly subtle amounts to a powerfully poignant conclusion. 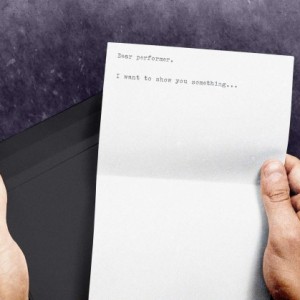 Nassim Soleimanpour‘s eponymous play is stripped back. Nassim is about longing, family, cultural identity and assimilation. Soleimanpour’s method, to place focus on each and every word written, contributes to Nassim‘s conclusion. Tim Crouch is the guest performer of the evening, taking on Soleimanpour’s script for the very first time. The audience introduced to the script as Crouch is. The evening is fun, there isn’t a pressure to perform to perfection and that’s refreshing. Simultaneously, there are points that demand a weight behind them, and this is where rehearsal would benefit.

Omar Elarian directs an authentic evening of theatre. It’s understated, he wants for Soleimanpour’s words to resonate. The integration of simple over head projection compliments Soleimanpour’s simplicity, again the focus of the evening heavily on the words chosen to establish the environment. The script is witty, conversational and encourages the audience that the evening is not to be a typical passive experience. Rather it’s an alternative foreign languages class, a class geniously teaching both audience and performer the basics of Farsi, the main language spoken in Soleimanpour’s native Iran.

How Soleimanpour is adjusting to British culture, the audience are simultaneously grasping the foundations of Farsi and Iranian culture and that’s incredibly smart. That is no easy feat, however Nassim achieves this. Nassim is a much needed piece of theatre, it arrives at a time where it is important to remember just how enriching learning about differing cultures is. The gateway of Iran is placed on our very doorstep, and it’s a culture rich with history and stories.

The evening is a game of two halves, the first, a rehearsal, the audience observing Crouch taking in the script for the very first time. He approaches the script lightheartedly, the friendly audience guiding him if ever he needs support. The second half brings the first into perspective, Crouch now able to perform a short narrative in Farsi. Imagine having told a performer they’d have to perform a play, in a language they have never seen, read or heard before? That would probably evoke a sense of dread, however Soleimanpour and script editors Caroline Ortega and Stewart Pringle construct a lesson plan, cleverly disguised as a play to break down those barriers and that is fascinating. Nassim‘s experimental nature shakes up how we consume theatre and that’s exactly what is needed at present. 3.5/5

Nassim was shown from Thursday 7th until Saturday 16th September 2017 at the Bush Theatre. For more information on the production, visit here…