Finding peace in the Middle East is a catchphrase drummed out by media outlets all across the western world, offering little to no explanation to what peace actually might look like in reality. J.T. Rogers’ latest offering Oslo at the National Theatre is a ballsy, comic insight in to the history making Oslo Accords, agreements set between the Government of Israel and the Palestine Liberation Organisation (PLO). 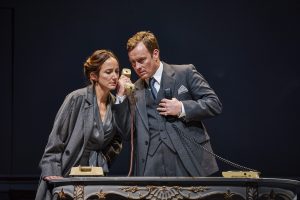 Spanning a time frame of the early 1990s, Fafo Institute Director Terje Rød -Laresen (Toby Stephens) begins using his academic theories on peace negotiations by exploring the idea of creating a secret channel for Israeli-Palestinian talks within the city of Oslo. With the help of his wife Mona Juul (Lydia Leonard) facilitating these covert discussions becomes increasingly strained and repetitive. Never once do they give up hope however, and this is the shining beacon that powers through Rogers’s writing.

Stephens commands the role with a charming stamina, however it’s Leonard who really excels in delivering this beefy political drama. She holds the weight of this script firmly in her hands, guiding both the audience and the Israeli and Palestinian diplomats through the tumultuous disagreements.

Male heavy and full of a spitting bite, Oslo doesn’t skirt around the undeniable leaks, lies and carefully worded sentences that eclipse any political movement. Rogers doesn’t hand us the story on a plate and make us pick sides, rather he wittily offers an objective look into a knotty conflict that may never be unfurled.A lack of transparency and interference plague the discussions between the two sides. As more and more diplomats are involved in the process the dream of peace fades further into the distance.

The whole cast is impressive, particular highlights include Peter Polycarpou as Finance Minister Ahmed Qurie and Philip Arditti as Uri Savir. Politics is a game of dick swinging but the female characters in Rogers’s work make us think that the world might be a much better place if women were in charge.

Projections (59 Productions) and lighting design by Donald Holder carry the tension well. Seeps of brilliant white light provide a warming relief to the chilling darkness that underlines the script. As Terje’s theories of negotiation become more entangled there’s a stinging realisation that achieving peace might rely too heavily on the unreliability of humankind.

‘How much further can we go?’ a line that provides a concluding thought over the whole piece. In the real story, only months after singing the agreement the PLO suspended their participation after an Israeli settler killed 29 Palestinians at a mosque in Hebron. The fiery tensions of the Middle Eastern conflict can never be answered in a two act play, however Rogers opens up the discussion on a national platform enabling us to look at ourselves and see that the similarities are far stronger than our differences. 4/5

Oslo is currently showing until Saturday 23rd September 2017 at the National Theatre. For the review, visit here…

« Previous post
Win a pair of tickets to Halloween Raveyard at The Vaults!
Next post »
Nassim @ The Bush Theatre Review