Gore Vidal’s The Best Man is an absorbing play looking at the issues of power and corruption that go hand in hand with anything connected to an American presidential race. It is full of fantastic, rich performances and so many twists and turns that we are kept utterly gripped. 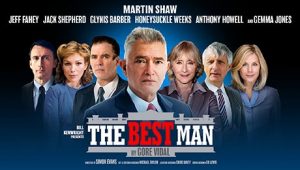 Starring a cast of illustrious actors, with stand-out performances from Martin Shaw as Secretary William Russell, and Jeff Fahey as his rival Senator Joseph Cantwell it’s a powerhouse group of excellent stage actors. Jack Shepherd is also brilliant as the labouring Ex-President Hockstader, who’s endorsement each of the candidates needs to assure their place in the history books, as their party’s presidential nomination.

There’s as much scandal and suspense as I’d have imagined and hoped for in a play dealing with such a subject matter, especially one written by Gore Vidal – the underhand manipulation and mud-slinging are as prevalent as we’re led to believe exists in these situations, through both fact and fiction.
The set is clever and works well for the large cast on the Theatre Royal stage, taking us from Russell’s hotel suite to Cantwell’s, and back again, mirroring the different ways in which they are approaching the campaign, and the stark differences between their family situations and religious beliefs.

Now, I enjoy an interval as much as the next person – usually an excellently timed moment to have a stretch and get a glass of wine – but in this case, I can’t wait for it to be over. The surprise leading up to, and cliff hanger at the end of, the first half is quite extraordinary and I rush back to my seat. It’s a pivotal moment, and the effect of it is drawn out during act 2, as each piece of the story comes together towards the inevitably explosive conclusion.

I am kept on the edge of my seat until the very end. I thoroughly enjoy the twists and turns within the story – my only small criticism is that I occasionally want them to be revealed a little quicker – perhaps I am being impatient, but some of the laboured pauses feel a little stretched at times.

That said, it’s a clever story and there are moments when I hold my breath waiting for the outcome of a particular element of the story.

The play is set in 1960, but of course, it’s impossible to ignore any parallels to more modern times, considering the current political climate and the way these battles have always been fought – the candidate’s attitude towards religion and bringing anything to do with that into their campaign, one candidate whose relationship is long past saving, but whose wife is willing to lie to the public and the press and stand by him to help his chances, the other whose wife is so committed that she doesn’t believe the mud-slinging, rumours and attempted smears that come out against him for a second.

I’ve found it most difficult to forget one particular example of this, during a conversation between Russell and Hockstader, and it’s one which I’m sure I can say we’re feeling across the world currently.
‘It’s just politics, that’s all. It’s not the end of the world.’

A fitting, yet quite terrifying quote, from a thought provoking, brilliant, and timely production. 4/5

The Best Man is currently showing until Saturday 30th September 2016 at The Theatre Royal, Brighton. To find out more about the production, visit here…