The power of a monologue, if written and executed well is undeniable. To have the skill set to establish a world perhaps unknown, or even familiar and enlighten the audience with a character’s ideals, beliefs, thought processes and emotions is commendable. Hijabi Monologues employs this method of telling various stories; its aim- to dismantle certain myths that surround Muslim women. 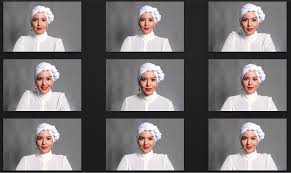 Written by Sahar Ullah , Amal Abdi, Hanan Issa and Nimmo Ismail, 6 women take to the stage to tell their, or someone else’s story. For the next hour, the audience are invited to listen to a group of strong women whose views would otherwise be pushed to the sidelines. This is important because it contributes to theatre’s openness to diversify and showcase a range of views. The influence of the media is undeniable, at speed and vast volume, outlets can perpetuate false claims and reinforce stereotypes that are just not true. Shows like this demystify, they bridge the gap in a world where there are plenty of divides.

Milli Bhatia directs an energetic evening, our protagonists want for their audience to listen to their experiences. The evening is not to be a weighty one either, the evening’s intent to talk about the everyday, again to bridge the gap between assumptions the audience may have and unite. The evening’s format intertwines the experiences of Muslim women in the UK, one at a time the cast invite the audience into their worlds.

There are particular Monologues that resonate; Michal Keyamo‘s football match anecdote humours the audience. Keyamo’s animated energy easily forming the basis for a stand a lone production. Aryana Ramkhalawon‘s eye rolling tale of having to answer the question of where she is genuinely from and having to dismantle stereotypes strikes a chord, the constant need to have to explain herself a harsh reality. Ramkhalawon’s delivery is sharp, fast and again could in itself form the basis of a stand  alone show. Hibo Muse‘s tale of a shy and reserved girl challenges expectation. Muse’s charismatic delivery demands for the audience to listen. The monologue has an air of mystery about it, who is the character Muse speaks of? It’s this mystery that gives the monologue its edge. Ayesha Dharker‘s subtle performance leaves the audience wanting to learn more. Her character, a mother speaking of a family tragedy and the day she is given life changing news. The monologue itself speaking of the day leaves the audience asking questions and wanting to learn more about her family.

The format allows for short but potentially resonant bursts of narrative, a variety of themes explored, each monologue bringing with it it’s own subject matters. This is admirable however as previously mentioned, certain monologues resonate more so than others. 3.5/5

Hijabi Monologues was shown from Thursday 28th until Saturday 30th September 2017 at the Bush Theatre. For more information on the production, visit here…