B @ The Royal Court Review

Time ticks slowly with anticipation in Guillermo Calderón’s four hander B, translated for the Royal Court by William Gregory. Anarchists Alejandra (Danusia Samal) and Marcela (Aimée-Ffion Edwards) just want to give themselves a voice, but experienced pro José Miguel (Paul Kaye) has other ideas. 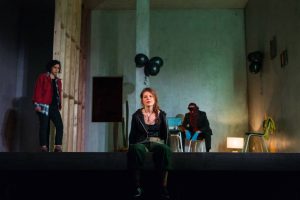 Calderón’s script interrogates the fine line between freedom fighting and terrorism in an age where ‘all we do is make threats on the internet.’ In a characterless flat on an anonymous street the three plot the perfect plan to seek political justice, but busy-body neighbour Carmen (Sarah Niles) interrupts this at all the wrong moments.
B, cheese and cow are all code words used for the nail bomb that sits dormant in-between the three vigilantes. However, It’s not just the bomb that’s waiting to detonate, this one act plays lacks the heightened drama it really should command.

Something in Sam Pritchard’s direction feels somewhat wooden. Short, snappy conversations come across as leisurely and dull. The richness of the characters is only ever explored through monologues, which although engrossing are rarely groundbreaking.

Edwards’ delivery of Marcela’s impassioned speech of losing a fellow comrade has a good pace and encapsulates the sense of liberalist fantasy that soaks Calderón’s script. Samal shares a similar poignancy, though their character’s fragile relationship seems to evade any dramatic analysis. Paul Kaye’s portrayal of been-there, done-that José is one of a lost soul, pitifully waiting for a real revolution to come along.

The three work well to bring out the humourous moments in the script and Sarah Niles adds the necessary vagueness to flexibly portray the cryptic Carmen. Underpinning all characters is their perception of the power of punishment, how can you be scared of prison when its the only reality you know? Bringing about justice will always mean a sacrifice, but the predictability of the plot is a surrendering of dramatic thrill on its own.

Fundamentally this piece critiques the idea of dying for what you believe in, giving up everything for something that seems worth the risk. Alejandra’s addiction to the perceived notoriety an act of terror would give her sheds a light on how indoctrination can become a drug for the disempowered. B falls far too short of expectations, with an unimaginative response to its subject matter. A climax for a real explosion of drama is annoyingly never satisfied, instead the bomb on stage seems to be a dud.  3/5

B is currently showing until Saturday 21st October 2017 at the Royal Court Theatre. For more information on the production, visit here…