Said to be the longest epic poem in existence, the Mahabharata is one of the most important Indian texts. A Hindu epic written in Sanskrit, the long form poem maps out the Kuruksetra War and the fates of Kaurakava and Pandava princes. The Mahabharata is highly revered as a text containing philosophical principles and also makes reference to another incredibly important text, the Ramayana. Inspired by one of the most significant female characters within the Mahabharata, Sharanya Ramprakash takes the story of Draupadi and crafts a piece Speaking up about gender inequality. 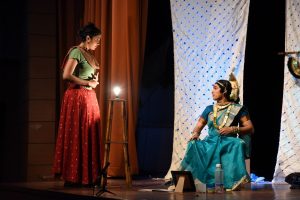 Ramprakash, having  been directly affected by gender inequality presents Akshayambara, a piece opening up the conversation about the political arena of gender. Here the audience watch as Ramprakash takes on the authoratitive role of Kaurava and Prasad Cherkady takes on the demure nature of Draupadi. This small scale convention of gender reversal that we take for granted here is revolutionary. Through Yakshagana, a temple dance form typically dominated by males, Akshayambara tackles the integral theme of gender by the challenging of roles, the conversations had by both Ramprakash and the critiques made by critics backstage as they prepare for their performances. Ramprakash forms a narrative depicting the multi layered topic of gender. Watching this unfold gives the audience no other option but to think about their own personal experiences of gender politics. This is to be applauded, the topic is three dimensional, a complex one that now more than ever is starting to be discussed.

Akshayambara enlightens, it depicts the subtle ways in which inequalities take place. With a fine tuning, the piece has the power to start up a conversation and challenge tradition. 3.5/5

Akshayambara was shown at the Southbank Centre from Thursday 5th until Friday 6th October. To find out more about the production, visit here…

To find out more about Teamworks India, visit here…