Uisenma Borchu is a German-Mongolian film director, based in Munich. After several acclaimed documentaries such as Donne-moi plus (2007) and Himmel voller Geigen (2011), her feature film debut Schau mich nicht so an (Don’t Look at Me That Way) won the Bavarian Film Award in 2016.
Nachts, als die Sonne für mich schien (At Night, When the Sun was Shining for Me) is Uisenma Borchu’s first work for the theatre and the Kammerspiele present this world premiere at their studio space Kammer 3. 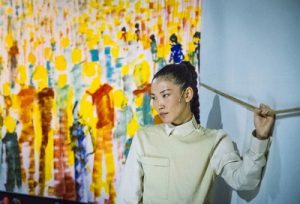 Borchu’s autobiographical play focuses on her experiences as a Mongolian immigrant, arriving with her family in East Berlin shortly before the wall came down, and on her relationship with her father, an artist. Whilst Uisenma Borchu’s adult self remembers her childhood in East Berlin, her father Borchu Bawaa is painting a picture of their East German past during the performance.

The stage is empty except for four panels that are used as projection screens. Borchu Bawaa is already present when the audience enters the auditorium. He is preparing his paints whilst slides of Mongolia are displayed – yurt tents, mountains, riders galloping across the steppe. Borchu Bawaa begins to tear down one of the yurt tents; he and his family are leaving Mongolia for good. A Mongolian song is played and Uisenma Borchu enters. She is now 33 years old and looking back at her arrival in the GDR whilst her father begins to paint his own memories in black, red and gold – the colours of the German flag.

The adult Uisenma Borchu remains mostly on the sidelines, watching the action unfold as two young actors – Lea Johanna Geszti as the young Uisenma and Christian Löber as her father – re-enact her memories. Occasionally, Uisenma steps in to comment on certain events, representing the inner voice of her younger self.

Despite the vows of socialist brotherhood and friendship between nations, Uisenma and her family are not welcome in the German sister state. Uisenma is bullied by her classmates and judged by her prejudiced teacher who tries to destroy the girl’s dream of becoming a writer and poet. Still Uisenma idolizes her teacher, who looks like a high-powered career woman as played by Araba Walton, unlike the rather conventional person depicted in a class photo that is projected on the screen. Uisenma’s father remains in his own world, painting. He never learns German but encourages his daughter to accept modern Germany and to make friends of her foes: “Mongolian word of honour?” Uisenma promises but the situation becomes worse after the reunification – latent xenophobia against foreign contract workers turns into blatant racism in the 1990s. Whilst Neo Nazis are marching, the police stand idly by.

Uisenma Borchu’s play does not just focus on her own life story, it also describes a time of upheaval. After the reunification, many East Germans had severe problems coming to terms with their new situation, feeling a loss of identity and self-worth. Although Germany has had an East German chancellor for the past twelve years, many problems still remain. Considering the recent success of the right-wing extremist party AfD (Alternative for Germany), particularly in the former GDR, Borchu’s play could not be more relevant. 4/5