Our teenage years are probably one of our most trying phases. On our paths to adulthood, there are expectations both on an educational and personal level that have to be met. From considering a chosen career path, to passing statutory exams, to navigating friendships, relationships and home life. These are the years where we really start to gauge who we are, our identities start to form. Joseph Barnes Phillips‘ Big Foot zones in on this particular phase, drawing focus on the concept of masculinity. 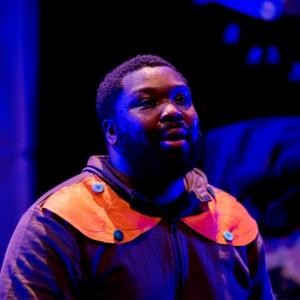 In collaboration with Stratford Circus Arts Centre and Black Theatre Live, HighRise Theatre present a one man show depicting the process of a teen having to grow up incredibly quickly. Faced with the harsh reality of his mother suffering from a terminal illness, Rayleigh finds that he is to now become the carer and think twice about his flippant choices. A ‘Jack the Lad’, his quick witted, bolshy persona makes for entertaining viewing, particulatly in awkward situations and this makes Rayleigh, the show’s protagonist loveable. Barnes Phillips’ ability to switch from a no nonsense, loquacious Guyanese mother, who due to her illness is mainly homebound, to a boisterous young male is seamless.  This forms the show’s identity, the witty relationship between mother and son, despite the heaviness and darkness of her illness impacting on their dynamic, making the evening light and at points humorous. The added addition of Rayleigh’s girlfriend enlivens the stage, this one man show in spirit, a vivacious three person show.

Nik Corral‘s set design collaborates perfectly with the quirkiness of the evening. Barnes Phillips’s bold characterisations start the ball rolling with their unrivalled confidence and flair whilst the mountain of toys that form the focal point for the evening cement this. The connotations of childhood act as a reminder that Rayleigh still has that yearning to live a care free life, however constantly faced with life changing situations, this design choice is a smart yet fun one.  The evening is underscored with a constant soundtrack of songs varying from Grime, R ‘n’ B, Calypso and Reggae, these all validate the evening’s authenticity and the audience are welcomed into Rayleigh’s world, influenced by his Caribbean roots.  Big Foot puts into question what it means to be masculine. Barnes Phillips crafts a play asking questions, he doesn’t depict an idea of perfection, rather the show’s protagonist is trying to figure out who he is, and that’s refreshing. Dominic Garfield directs a colourful, heart felt and honest piece. HighRise Theatre inventively ask questions, and start up a conversation on masculinity. 4/5

Big Foot was shown at the Queen’s Hall, Hexham on Wednesday 18th October 2017. This review is based on a live streamed performance. The production is currently on tour, for info, visit here…