St George and the Dragon @ The National Theatre Review

Roy Mullarkey’s new play tackles ideas of leadership and heroism. This is the second time this year that in the Oliver a young male writer has attempted to tackle folklore and myth. Mullarkey feels out of his depth. This play doesn’t have the same slickness as his Royal Court comedy, The Wolf from the Door. 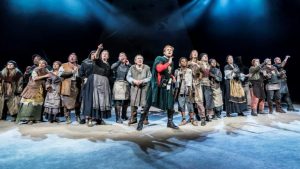 Julian Bleach’s Dragon seems all too familiar to that of Jeremy Iron’s Scar in Disney’s The Lion King. Lacking in originality and depth, you quickly see through his performance. In an attempt to demonstrate his power, he tears apart George’s metallic armour made by the village.

Unfortunately, this costume is so shoddily made and flimsily looking, that when Bleach peels it off it does anything but present the almighty strength that the creature possesses. The same can be said for the entirety of Rae Smith’s design. It’s cheap looking and whoever said less is more clearly never saw her concept.

Donning a Steve Coogan like wig, Johan Heffernan plays our limp hero. He is probably the show’s only beacon of hope, and does his best to offer light moments that try to distract you from the play’s repetitively dull cycle. He is optimistic, something the audience is trying to be as well.

George has to rescue his damsel, and in the medieval times this means through sword fighting on a magic carpet. We don’t see any of this, and instead have to sit through the actors staring aimlessly into the Olivier lighting rig as they glibly tell us how George swishes and swoops to fight the dragon. We do see two clunky dragonheads zip wire downwards and crash onto the stage, but the whole sequence seems a bit naff.

I feel like I’m watching a rip-off Monty Python sketch, or a mediocre BBC comedy. Mullarkey is attempting to make St George a comment on our Englishness, but his execution of this is weak. It’s impossible to take this play seriously; you simply can’t with how poorly it has been produced.

Watch it on face value and you might enjoy, but dare not dig any deeper into the themes and messages. If you do you’ll become increasingly lost and get yourself all in a tis. Laugh at the cartoonlike tech, but don’t expect your enjoyment to go any deeper than that of face value.

The production has moments of wit, but this pantomime becomes increasingly jarring as it goes on. It drags, and drags, and drags, until you are pleading for the final lines to be spoken. There is the odd moment when you feel engaged, but it’s a long evening that overall disappoints. 2/5

St George and the Dragon is currently showing until Saturday 2nd December 2017 at the National Theatre. To find out more about the production, visit here…