This latest tour of Headlong’s sell-out west-end show from the National delivers a play in which form and content compliment each other with enigmatic dexterity; in which questions are posed by characters who themselves are somewhat questionable in both intent and integrity, and one is taken on a journey that the play itself keeps on telling you is pointless, but turns out to be anything but. 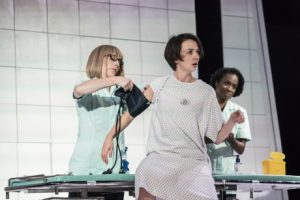 Barely minutes after the play begins, you are blasted with a sensory explosion of sound and feeling, accompanied by some of the company’s signature physical aesthetic to provide the sensation of a drug-induced psychotic break in sympathy with the protagonist, Emma, as both audience and character struggle to make sense of each new reality presented to them.

The main source of this uncertainty comes from Emma herself, who simultaneously strives for an unattainable, objective truth in her own reality while doing everything in her power to destabilise it for those around her. It would be very easy, to dismiss her as simply another tortured intellectual, wrapped up in her own nihilistic self-indulgence. However, as the play progresses, it reveals itself to be a much smarter, more self-aware piece than its somewhat gauche inception might suggest – rather than presenting us with another instance of a self-obsessed, middle-class artist who just can’t even with life because it’s all so meaningless, it’s nice to see this trope taken down a peg or two to actually touch with some integrity on problems and questions of addiction, belief, family, and responsibility.

While the script through which it achieves this is perhaps, at times, a little protracted, the sheer quality of the writing makes it well-worth the time invested, and, in this production, is brought to life by an exceptionally powerful and beautifully realised set of performances from a singularly capable cast. The relationship between the tempestuous Emma and her phlegmatic physician is a particularly interesting dynamic, as well as the tremendous ensemble spirit created by the whole cast in the intermittent rehabilitation sessions. The set too is a mercurial masterpiece which employs an extraordinary plethora of media to create an amorphous theatrical organism that envelops the actors in the perfect means of delivery for their story, and the trademark Headlong approach which weaves itself seamlessly through the story makes for a uniquely captivating experience.

This ultimately seems to be a play about a woman trying to make sense of the reality presented to her, and the play creates a very similar effect upon its audience. Just as one feels one has grasped the main thrust of the narrative, the essence of the characters, or any sort of abiding theme, these expectations are confounded, and another curtain is thrown back to reveal a new reality, only to realise that this too might be just another backdrop to something deeper and more unsettling. In this way, the Headlong/National collaboration have created a work of visceral contradiction and sublime cohesion to deal with a number of timely, challenging, and superbly realised themes with both energy and poise. 4/5

People, Places and Things is currently showing until Saturday 28th October 2017 at the Bristol Old Vic. To find out more about the production, visit here…