All The Little Lights @ The Arcola Review

All The Little Lights is a robust, complex play that encourages the audience to read between the lines and engage with the nuances of its three characters, estranged best friends Joanne and Lisa, trapped in a circle of love-in-hate, and 12 year-old Amy. Jane Upton’s script avoids a patronising signposting of content, and, in so doing, best suggests the insidious nature of its subject matter in a world where signs are missed, bruises hidden, and voices silenced. 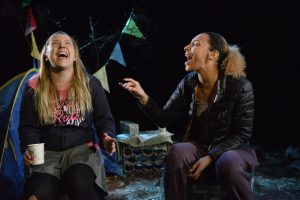 This content is unflinchingly dark, grappling with the problem of child sex trafficking, sexual abuse and social inequality. The production of All The Little Lights at The Arcola tackles the script effectively enough, aided by a fantastic set, but never quite hits its stride – and Upton’s script is perhaps too ambiguous at its close to truly satisfy.

The set is detailed: a small tent sits before a sparsely-leafed tree, which is strewn with plastic bags. Empty crisp packets and scrunched water bottles litter the floor, along with the autumnal debris of fallen leaves and muddy grass, and a train track runs through gravel in the background. This track focuses some of the play’s most compelling moments, when the three girls stand in the face of an oncoming train, daring each other to remain on the tracks until the last possible moment.

The tension at these points is thick, and the relief at their victorious screams as they lie on the gravel, unharmed, is palpable. It is a huge shame that I feel this tension seriously lacks at other points. Moments where Lisa and Joanne square off to each other feel very forced, made less believable by the somewhat gimmicky decision to have actors Sarah Hoare and Tessie Orange-Turner literally face-off, noses bare millimetres from each other. Other points of conflict are similarly flat: I never believe that Orange-Turner’s Joanne is capable of what she threatens. Perhaps this is the point, but it means that moments of script that need danger and threat underscoring them are lost. If it isn’t for the humour injected by Esther-Grace Button as the young, naïve Amy, the play would be totally one level – a deep injustice to the many layers of the societal problems with which it attempts to engage.

It has its moments, mostly involving a birthday cake and cereal. The conversation between Amy and Joanne where the former shotguns the coco pops brings a smile to my face, as I remember very similar conversations between my sisters and I. The characters are well-drawn and sympathetic, trapped, too young, in the cycle of abuse and poverty. However, this isn’t enough to save the production as a whole. The promise of the script never quite peaks, and I’m still not sure what really happens at its close – an ambiguity that only leaves me frustrated, rather than curious and questioning. 3/5

All the Little Lights is currently showing at the Arcola Theatre until Saturday 4th November 2017. For more information on the production, visit here…