The age-old tale of Rumpelstiltskin has been reinvented and presented beautifully by balletLORENT. The tale for this piece is retold by poet Carol Ann Duffy, it is told in a simplistic way to allow the dance to complete the tale and ensure the young audience know what is going on. You know a family show is getting it right when you don’t hear all the children around you fire constant questions at their parents about what’s happening. 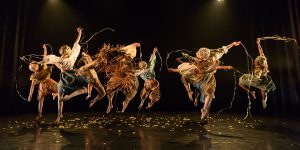 This story of love, loss and greed tells the tale of a King who loses his Queen during the birth of their child. The King is overcome with grief, he casts his son aside and spends his days mourning his queen and counting his gold. His subjects try many things to rouse the King from his grief. Only one talent gets his attention, but things are not quite as they seem. Little does he know it’s his own son that holds the talent that so pleases him.

The stage design for this piece is very visual and has lots of hidden intricacies that are revealed as the performance goes on. The height of the castle made the setting seem bigger and created a greater impact. The set was continuously changing and developed as the tale progressed. The way in which the dancers interact with the set help further the imagination and the imagery caused by it. They manoeuvre it effortlessly and therefore make it all appear and feel very natural rather than a fairy tale.

The dancers are very well rehearsed and choreographed, they tell the story very convincingly. The story is told in a way that there are long periods between the tale being told over the scene which requires no explanation. Even for the very young members of the audience. They tell every emotion with the expression on their face, with the meaningful movements they are making and the way in which they interact with each other. Given the variation of ages amongst the cast members, nobody appears out of place at any time. Although you can see some of the adults in the ensemble directing the children, it fits perfectly with the scene and is disguised as something that would be happening in that scenario.

The production is arranged in a way that allows the young audience to keep up with what is going on while still being fascinated by the amount of activity on stage throughout. There are some very busy scenes with lots going on, they are full of colour and full of life. They create a great energy both on and off stage. I have to give a particular mention to the sheep. They go down very well, especially the baby ones. They are received with a mixture of coos and laughter by the audience on almost every appearance.

This piece is very well put together and is a unique take on a family favourite. 4/5

Rumpelstiltskin is currently showing until Saturday 28th October 2017 at the Northern Stage Theatre. For more information on the production, visit here…