This light-hearted show is full of fun, frolics and laughter from the outset. Displayed on stage 3 at the Northern Stage, the cast interact with the audience as soon as they begin to enter the room. This Esther McAuley play is aimed at 6-11 year olds, families and schools and contains British Sign Language throughout. 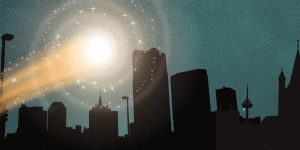 Great Odds is about identity, friendship and dreams. Three rather odd characters, Grouch, Marco and Jewels make up the Great Odds Theatre in which they put on their stories. They are under threat of eviction from the Big Boss and so try to put on their best show yet in an attempt to save it. They encounter some problems along the way but work together to overcome them. This may not be enough to save their lovely theatre however.

The three characters all present and tell the story in different ways. They use puppetry, sign language, visual storytelling and music. With a mixture of a deaf and hearing audience, this play is presented in a way that allows us all to follow every part of the story. Grouch communicates with the other characters and the audience through British Sign Language throughout. Marco narrates the story out loud as well as using sign language intermittently. Jewels is in her own little world, communicating with various musical instruments attached to her body as well as whistles and her tap shoes.

The pace of the story is perfect for the audience it is aimed at. There are times when they stop and explain what has happened so far and what is happening next. The level of audience interaction really adds to the piece. The cast invite the audience to pick a name for the star of their new show. This is done through sign language between Grouch and a young audience member that is part of a school group that fills the front row. This is of course narrated by Marco so that nobody is left out of the loop.

There are a few little timing issues during the performance, for example the cranking of the bar on the boxes don’t always match the timing of the sound effect. Or the tap dancing to demonstrate the sound of the rain doesn’t start at the same time as the description of it. However, these minor things could easily be forgiven in this setting.

The piece naturally ends on a high as you’d expect for a family show. It delivers a positive message and is presented very cleverly and is a great display of acting that incorporates sign language rather than it being separated from the piece, which you more often find. It goes down very well with the school class in the front row and they are very excited to be able to have an input in the show and to talk to the actors before, during and after the show. 4/5

Great Odds was shown from Wednesday 8th until Thursday 9th November 2017 at the Northern Stage. To find out more about the production, visit here…