This Beautiful Future is a transporting vision of innocence and regret as teenage lovers Elodie (Abigail Lawrie) and German soldier Otto (Tom Morley) shelter from the chaos of France’s liberation and dream of better days ahead. 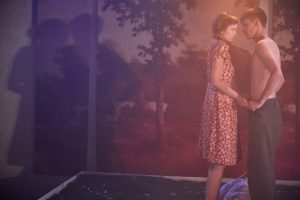 Courtesy of the Yard Theatre.

This familiar, sepia tinged love story is framed with markedly unconventional touches; a much older couple (Alwyne Taylor and Paul Haley) affably greet the audience and spend much of the show confined to two booths from which they provide an affectingly melancholic soundtrack of lo-fi karaoke pop numbers.

The central couple’s interactions have a manic, scatter-shot quality, almost infantile in their illogic, but the mania occasionally causes them to fall out of sync and stumble over the rhythm of the text, the less animated, more intimate moments of calmness are much more convincing.

The language of the play is distinctly contemporary and is intentionally delivered with an anachronistically modern cadence (A technique that currently has a high profile cinematic proponent in Armando Ianucci’s The Death of Stalin). Although potentially jarring at first it is a choice that serves to highlight the naivety of the teenage couple in the face of barely imaginable circumstances. It is a formal experiment characteristic of the production as a whole, initially hard to swallow but easy to accept once the rules of engagement are defined.

Some highly pertinent themes are touched on momentarily: the fragility of Europe, Fascism’s seductive myth-making and the corrupting influence of power are all referred to and then kept on the boil, just under the surface, maintaining an additional layer of richness and meaning throughout.

Kalnejais’s play deserves praise as one of the increasingly rare works to reveal the humanity in the seemingly irredeemable. The fact that we are so gently endeared to Otto, a young man who supports genocide “The orders are good” and boasts of his exploits as a member of a firing squad, is a considerable feat and a much needed tonic in times of knee jerk condemnation. Otto’s wide eyed naivety as he embraces the wrong side of history takes on a tragic resonance as events progress.

The relationship of Otto and Elodie to the peripheral older couple raises many questions, but provides the play’s most enduring emotional power. Ultimately, the specifics of who or what they represent become irrelevant, particularly as the play seems to attest to the importance of the sensory above all else. Their list of what they would have done, and will do differently, “I’d believe that love at first sight is real, I’d get better at coding” is occasionally humorous but gradually takes on an incantatory quality that is incredibly poignant.

The impeccable sound and lighting design has a fluidity that works to reinforce the exuberant yet reflective tone of a play that is dotted with moments of genuine theatrical magic, particularly in the latter third, I don’t intend to spoil them here.

This Beautiful Future applies a gently anarchic approach to form with an engaging love story, achieving a sublime balance that lingers on the senses long afterwards. 4.5/5

This Beautiful Future is currently showing until Saturday 25th November 2017 at the Yard Theatre. For more information on the production, visit here…