The Resistible Rise of Arturo Ui @ The ADC Theatre Review

Corrupt business propositions and anarchic violence are shrouded under the brim of the gangster hat. In the ruling dictatorship of Arturo Ui, Brecht’s Hitler parody is a gangster spectacle, but this production lacks the bite they so often chew over. 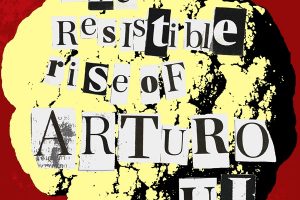 “Don’t yet rejoice in his defeat, you men!
Although the world stood up and stopped the bastard,
The bitch that bore him is in heat again”.

Animosity in search for power and protection, Arturo’s rise to power, among the murk of the Great Depression, is a corruption manifested. Willing to lose anything in order to gain everything, small time crook Arturo longs to make a name for himself, but it is the civilians around him who will either follow or face consequence. Under the guise of the vegetable market, the Cauliflower Trust seems booming and it is the influence of Ui which has everybody reeling.

In this ego-boosting allegory, the cast perform a stylised, crisp and enigmatic show opening with a trigger pull. But the bullet, though fast taking off, often drags with clunky scene changes and slow speeches. Immediately breaking the fourth wall, we are identified as the audience. The opening is striking and full of pace and punch, the black and white design state grabs you and forces you to accept the mob utility. Only straying with Roma’s striking red trilby and graffiti backdrop, the set is industrial (black and white) constructed from scaffolding planks and rostra.

Act two picks up with a court case and the introduction of video projection is an intriguing device, highlighting the undeniable reality and connection to Hitler’s Germany. Plucking out moments of comparison, I only wish the video projection is incorporated more often, setting up the Epic Theatre practice. In extension of this, transitions should be completed in a brighter lighting state, after all ‘Art is not a mirror held up to reality but a hammer with which to shape it’ (Brecht), which is sometimes forgotten.

There are several stand out performances and the grotesque gangster front is achieved. In a haze of smoke, you are transported to Chicago and there is no denying the underlying threat. Music enhances this, with heartbeats and gun shots throughout. The use of gender bending, with female actors portraying several male characters, challenge and engage the audience, cleverly woven into the definition of characters. Whilst the production makes me listen it does not force me to follow, and if I am not forced to follow Arturo, why am I here? I want to feel threatened, like the only way to survive is to follow, however I leave the theatre with my political thoughts intact. 3/5

The Resistible Rise of Arturo Ui is currently showing until Saturday 11th November 2017 at the ADC Theatre. For more information on the production, visit here…