This is a timely play, but not a timeless one. It is dated, and overlong, and some dialogue is too clever by half and therefore anachronistic onstage. But it’s also timely: its revival is another commemorative nod to the 1967 Sexual Offences Act, and, somewhat more sinisterly, it explores the uncomfortable dynamics of sexual power between queer schoolboys of differing ages. 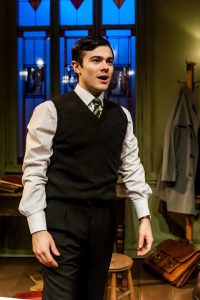 Courtesy of the Finborough Theatre.

Set in an unnamed British public school, the play centres around one housemaster, and the relations of four of his pupils. Head of House Park, played with jerking, muscular gusto by Oliver Gully, confides in his housemaster, the excellent Simon Butteriss, that he has heard of sordid goings-on in the house, and is determined to stamp them out. The schoolteacher agrees that such activity must be checked, against the cry of Park’s best friend and fellow prefect Tully’s assurances that such rumours are lunacy. But Tully himself, inevitably, turns out to be one of their greatest perpetrators. When he concedes to his young lover’s bet to seduce another young boy, the disquieting relations of sexual power, the matter of consent and freedom of choice are brought to the bar.

On 30th October 2017, Owen Jones wrote an articulate, engaged piece in The Guardian. He denounced Kevin Spacey’s crass decision to come out as a gay man within the same statement that rejected the rising tide of sexual assault allegations against his person. Jones delineates this alignment of homosexuality with child sexual abuse as one of the main reasons that gay men have historically had their rights rescinded, and worries that Spacey’s statement may encourage further oppression of the LGBTQ community. The resonance that these issues have for Quaint Honour needs no further explanation. Tully’s impassioned speech to Hallowes (the housemaster) that he and Hamilton spent their time together willingly and earnestly, that the younger chose to be with the elder of his own volition, falls on deaf ears: Hallowes is most outraged not by the act, but by the power dynamic and age difference between the two. In a post-Weinstein, post-Spacey world, this offers robust cultural commentary.

The script has moments of beauty alongside the darkness. These are made the more eloquent by Harley Viveash as Tully. His monologue about bread, and speech about milk (other than being weirdly food-related) momentarily stop your breath. Performances across the board are similarly strong, and the set is suitably shabby, and flexibly used throughout each slick scene change, but it’s an overwhelming white male cast. Alright, it’s a play about same-sex relations in an English public school, and it is refreshing that the script allows the boys to explore their selfhoods, flaws and all, without total tragedy – unlike much other artistic representations of queerness. Yet, as a queer woman, I do sometimes wonder where our side of the story is.

Quaint Honour is a vibrant production, strengthened by its performances and the topicality of its subject matter. It’s not perfect, but it’s absolutely worth watching. 4/5

Quaint Honour is currently showing until Tuesday 21st November at the Finborough Theatre. To find out more about the production, visit here…