The first rule of news: you do not become the news. This is easier said than done, as UBS TV Anchorman Howard Beale proves, when he announces his planned suicide on his evening news slot to many a bewildered audience. In a moment of madness that should have ruined his career, it actually propels Beale to stardom, making him the most watched broadcaster on the TV circuit. 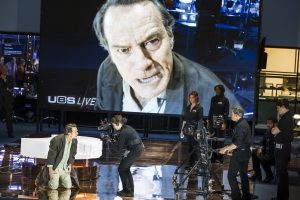 Thirty million more people tune in after Beale calls  “bullshit” on society. He claims that “bullshit” is the reasons we give ourselves to live; we must stop living in a community of complacency, and instead step out and take charge. This ignites an act for change, not a riot, but nonetheless chaos ensues.

Bryan Cranston plays the pariah, and he is magnificent to watch. The heightened, in-your-face camera shots allow Cranston to show off his masterful technical screen ability. As Beale, he is incredibly likeable, and his delicate delivery allows you to connect with every word, drawing you in to a place of rawness.

When he flips and has a spontaneous vent he is like an angry prophet, denouncing the hypocrisies of our current time. He’s “mad as hell” and he wants you to yell it with him, and not stop. Once you’ve got mad, that’s when you then decide what to do next.

Michelle Dockery is icy-cold as TV executive Diana Christensen. Comparisons could be made between her and a few media moguls of today – the people who have an innate desire to climb to the top and not worry about whom they crush on route. In the network all people care about is ratings. Christensen has tapped into that, placing Beale on a platform, (somewhat Saturday Night Live ‘esque), to articulate the popular rage. This of course boosts viewing figures, but also locks up Beale, (hypothetically), like a caged zoo animal, thus posing questions on where TV’s ethics lie, or perhaps if they even exist.

Ivo van Hove has spared no expense in transporting us to the media world. Cameras are everywhere, I mean it, everywhere – on stage, backstage in the audience, and we are even treated to a gorgeous scene of our very own Southbank. Jan Versweyveld’s bright design is a definite assault on the eyes, but one that you welcome with eagerness. Along with video designer Tal Yarden, the creative team have come up with an aesthetic that honours the Oscar-winning Paddy Chayefsky film.

Credit must also be given to Lee Hall for his savvy adaptation. The mediums of theatre and film are blended together so well that it’s almost like you are watching both on stage. I’m normally rather sceptical about movies transferring to the stage, but it is clear that Hall has a real talent for adaptation. He is after all the man that brought the sell-out hit Billy Elliot to the stage.

The entire production is a delight. Every camera angle provides a different reaction. There’s curiosity in the auditorium, and the impressive technology allows the chance to get up-close and personal with the characters.

Nastiness attracts viewers, sex sells, outrage causes discussion and violence achieves ratings. We’re all capable of these ‘mad as hell’ moments – we’re all complicit in their application in society. We embrace rage as entertainment and are turned on by something outrageous. We click to view, so who has the control – the media, or us? 5/5

Network is currently showing until Saturday 24th March 2018 at the National Theatre. For more information on the production, visit here…