The topic of race is a complex one, one that will have society talking, discussing and debating for centuries to come. Conversations have become increasingly overt, due in part to shifting attitudes. Lynette Linton’s #Hashtag Lightie is a landmark production, it brings to light what it means to be mixed race within the UK. 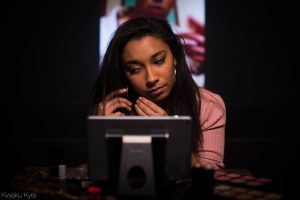 #Hashtag Lightie comments partially on an increasingly social media obsessed youth, Ella, finding solace in her ever growing online fan base capitalises on her looks. It is here, Ella is exposed to an array of opinions as to what constitutes beauty. Linton boldly initiates conversation via the very presence of Ella played vivaciously by Adele James. Without realisation, Ella unearths racial tensions, the most prevalent being the ‘light skinned/dark skinned debate. Watching references to this debate is stark, this conversation from a personal point of view resonates, and watching this being explored is powerful.

Linton places the day to day of a mixed race family at the fire; Melissa and Aimee, Ella’s elder siblings are both in stable relationships, however the race of their partners to some sends a clear message as to what ‘side’ they have chosen. This concept of a ‘side’ depicts the notion of a person of mixed heritage choosing the heritage they identify with, a notion that inevitably defines, to some, who they are. Linton picking up on this element shows her attention to detail, she challenges this notion of choosing sides and questions it. John Omole’s upbeat Bradley and Sophia Leonie’s down to earth Aimee clash over flippant comments alluding to heritage. Jamie Richards’ charismatic David and Grace Cookey-Gam’s rational Melissa battle over her determination to have a narrative of hers published focusing on race. These conversations with both couples is never forced, they are organic and therefore authentically cause friction, audible gasps from the audience validating this. Devon Anderson’s self-asssured Aaron (Aimee’s twin brother) portrays the tough metophorical armour a male, particularly of colour finds themselves building up. All laughs initially, personal accounts of not being able to pick up his daughter due to her school not believing he is the father and being attacked whilst away bring to heart the prejudices that some sections of society still hold, and this is haunting.

This is what Linton achieves well, she spins multiple plates, presenting the audience with a varied take on an issue perhaps not explored as much as other sections of the UK community. The piece is inter-generational, the siblings are of varying ages, this impacting on their experiences. Rikki Beadle Blair directs an ever moving narrative, swift scene changes endorse Linton’s ambitious play. Video projections, courtesy of Black Apron Entertainment give the piece its 21st century stamp, social media accounts boldly illuminating the space as the audience take their seats and throughout the piece. Kudos to Linton for creating a memorable piece of theatre blazing the trail for narratives focusing on the multi-faceted mixed race experience. 4/5

#Hashtag Lightie is currently showing until Saturday 2nd December at the Arcola Theatre. To find out more about the production, visit here…