A swashbuckling tale of piracy, hidden treasure and adventure; Treasure Island is a real family show from start to finish. Gem Hawkins (Jim Hawkins in the original story) takes us on an exciting adventure to find hidden treasure after a stranger turns up at her family’s inn. Discovering the map that this mysterious stranger keeps safe, Gem runs from her home and joins the Hispanola’s crew and sails the seven seas finding herself among blood thirsty pirates. 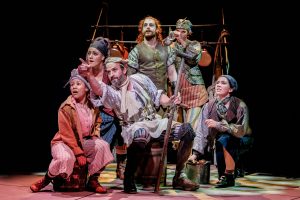 Treasure Island is a well-loved tale by all, and director Theresa Heskins’ honours this and brings the beloved story to life. It is creative, gripping and an all-round enjoyable piece. It is a real family production and is thoroughly entertaining. The story is easy to understand and follow which is perfect for a Christmas show as everyone could enjoy it. Heskins’ brings a new light onto the classic tale and adds some contemporary twists. It is a great piece and I feel is one of the best pieces within Heskins’ career.

A crucial element in the production is the use of music – I don’t expect to see a pirate rock band when I go to see the show! The music is all performed live by the cast on an elevated platform above one of the voms. The cast swaps in and out of being on stage acting and on stage playing in the band – the second act even starts off with a song, which is a great way of getting the audience straight back into the piece. It is a great addition to the production and adds a unique element to it. The talent of the cast amazes me in the way they change from an actor to a musician in a split second – a talented cast through and through. To accompany the music there is a great deal on singing both choral and solo; the choral is particularity impressive especially when young children join the stage as various supporting roles.

Technically, this show is exceptionally good. With the New Vic being in the round, technical aspects can sometimes become complicated and often need a creative mind to use the style of stage to compliment the show – and they nail it. The lighting and sound suit the show perfectly, it has a presence without taking over the entire show. AV is also used in the show to portray the treasure map to the audience. The AV moves and swirls across the stage bringing the audience into the production in a magical way. Many of the technical elements of the show are amazing and really make the piece exciting; although when the coins don’t make the correct noise and are clearly made of plastic and real drinks aren’t used on stage it does remind me that I am only watching a show rather than getting lost into the magic of theatre. But, there are some amazing props in the show too – for example, a metal parrot that is operated live by an actor that embodies the bird’s mannerisms. It is fascinating to watch this and is up there with the most impressive parts of the show.

The set, although simple, is wonderful and adds such an exciting element to the show. The main feature is the way the rigging drops down from the rig and are pulled through the floor to allow the actors to climb and swing across the stage adding excitement and thrill to the production. There is a great deal of flying in the show and it is always a surprise to see something fly down from the rig and watch Gem swing across on a rope. I’m thrilled they are able to include this element to the show as it brings the show to life and out of the conventional space.

Costume, again although simple and very conventional for a show that has a pirate theme, makes it very easy to recognise each characters status and role. My personal favourite costume is probably the most simple of them all – the costume that represents death. When a character dies, from each vom several actors enter dressed in a ragged old sheet, underneath is a pirate’s hat. This is simple but haunting and creates a very clear but creative way of showing a character has died. Proof that sometimes less is more!

The programme isn’t something I would normally mention as it’s often just filled with a few interviews and production photos which are good to have a flick through – but this programme is interactive and great fun! It includes puzzles, your own pirate name as well as the interviews. I can say I certainly have a great time in the interval!

Overall, I’ve really enjoyed this production of Treasure Island. It is fun, family friendly and fantastic. I can’t say I am disappointed in the slightest.

Treasure Island is currently showing until Saturday 27th January at the New Vic Theatre. To find out more about the production, visit here….