Accept. Enjoy. Merge. Glorify. Glorify. Glorify. (Timothy Leary). The Virgin Suicides was the 1993 debut novel by acclaimed American writer Jeffrey Eugenides. Set in a Detroit suburb during the 1970s, the fictional story centres on the lives of five teenage sisters who are raised by fanatical Catholic parents: Cecilia (13 years), Lux (14 years), Bonnie (15 years), Mary (16 years), and Therese (17 years). After the youngest girl makes an initial suicide attempt, her sisters are placed under close scrutiny by the parents, eventually being completely confined to their home. The girls seek to escape their imprisonment but their parents thwart their efforts and isolate them even more from the outside world, thereby destroying their dreams and suffocating their spirit. The girls all commit suicide within a year. 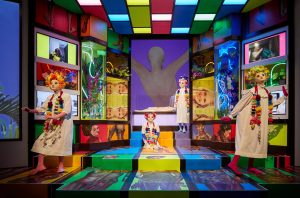 The novel is written in first person plural from the perspective of an anonymous group of teenage boys who observed the Lisbon girls and became obsessed with the “ten-legged creature”. They turn their tree house into a shrine with devotional objects of the girls such as a bra or an old hair brush, which are later used as evidence that does not prove anything. Despite all their efforts, the death of the girls remains a puzzle.

Susanne Kennedy, who directed a variety of productions at the National Theatre of Den Haag including Phaedra’s Love by Sarah Kane and Enda Walsh’s The New Electric Ballroom, returns to the Münchner Kammerspiele with her unique production of Die Selbstmord Schwestern – The Virgin Suicides. Kennedy’s work is not an orthodox adaptation of the novel, rather a combination of theatre and art – installative performance theatre.

In her production, Susanne Kennedy explores the “male gaze” that the Lisbon girls are exposed to, adapting the perspective of the boys who have turned the young women into icons of femininity. Now aging men, they still struggle to find an explanation for the girls’ deaths as they eventually have to face their own mortality. The men reconstruct the details from their memories, while the audience shares their voyeuristic gaze and embarks on a journey of recollection and awareness, guided by the words of LSD-guru Timothy Leary, which offers a rather different perspective than that provided by Jeffrey Eugenides.

Susanne Kennedy uses only fragments of the novel and focuses on motives within different contexts, structured by the Tibetan Book of the Dead. This manual on how to die offers no salvation but discusses the transience of life, a reversed initiation that takes 49 days to completion. Kennedy’s production is divided into six parts, spread over 49 days of memories. It concentrates on the repression of death and the transience of life and uses motives as visualised material.

A cast of five actors (Hassan Akkouch, Walter Hess, Christian Löber, Damian Rebgetz, and Ingmar Thilo) recall the memories of the girls. They are completely unrecognizable behind masks that are inspired by Japanese Mangas, representing images of stylised femininity with huge baby blue eyes and fancy headgear. Attired in white nightgowns as mentioned in the novel, every inch of their skin is covered by long gloves, stockings, and the masks that go over their heads and necks (costume design by Teresa Vergho). The actors appear like possessed dolls who have strange voices speaking through them, all provided by Cigdem Teke.

The characters on stage have met to remember the girls. They are the companions of their deaths. At times the girls themselves are speaking through them, at other times their observations are shared. In recurrent rituals, the characters carefully explore their relationship to the Lisbons thereby revealing themselves. A projection of an androgynous being served as a guide.

Lena Newton‘s stage design serves the glorification of the girls and their dreams and as a temple of death. Resembling a winged altar, yet as colourful as a pinball machine, this combination of a museum and a shrine features display cases with items once owned by the girls which are now relics to the men and used as evidence as well as a teenage fantasy land: Donuts growing on bushes, exotic flowers, coke bottles, tubes shimmering in different colours. A monitor displays YouTube videos of make up tutorials. There are images of Kirsten Dunst, the embodiment of girlishness, who played Lux in Coppola’s film, as well as pictures of the virgin Mary and anatomical drawings. A naked girl, possibly representing Cecilia, is lying in a glass coffin, evoking images of Snow White. The five sisters have become icons of girlishness and heroines of death.

Susanne Kennedy’s production is like an LSD trip to Manga-Land, offering a flood of colourful images whilst confronting us with the inevitability of death. 4/5

Die Selbstomord Schwestern will return in 2018. For further info, click here… The production is in German and English with English surtitles.