‘Has anyone ever told the truth?’ asks Liwaa Yazji in her weighty political drama Goats, translated for the Royal Court by Katharine Halls. And if it’s truth we’re after this play is as chaotic as it is vital, but Hamish Pirie’s direction seems to flounder and distract from the content of the piece. 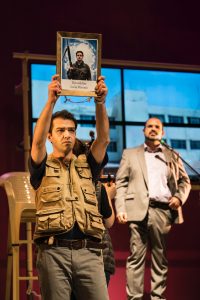 A small Syrian town is ravaged by the effects of civil war and terrorism. Families are torn apart when their sons come back in coffins and the community is being ripped at the seems by lies and propaganda from all fronts. When local party leader Abu al-Tayyib (Amer Hlehel) bestows the gift of a goat for every boy martyred to the cause it seems that he has mastered the perfect cover up for the political indoctrination that he is spreading. But can the truth ever prevail when fear and violence are so complexly intertwined?

A heavy script like this needs rigorously structured direction, a hard task when the cast includes six live goats and an overabundance of set. To a chorus of coos and giggles from the audience, the goats easily upstage the cast as they plod along blissfully diverting our attention. It is hard to tell if this is deliberate; like the villagers, are we falling for the same distraction techniques?

However, the goats aren’t the only hinderances blotting the piece, half of Sirine Saba’s dialogue as the news presenter is cut short as the cast awkwardly haul coffins across the stage in the first scene. Odd lines are missed by poorly thought out staging and the constantly flickering television screens take away more than they add.

Amir El-Masry concocts his brutish ‘war hero’ character of Adnan masterfully, which allows the second act to roar with toxicity. Saba’s voice purrs with self assurance as the exasperated Imm al-Tayyib as if she’s about to lay a vicious attack on husband Abu, It’s a shame that her multi-rolling character as the TV news presenter is written with a chronic flatness.

Though the script is peppered with comic moments, the jokes seem to fall short of full bodied laughter. It seems that Goats neither achieves being a dark comedy or a cruel tragedy. The image of Adnan atop a fridge hurling abuse at his wife (Isabella Nefar) riles with the venom of a man wrecked by war, but the illusion is shattered by the endearing bleating of a goat watching the madness unfold. 2/5

Goats is currently showing until Saturday 30th December at the Royal Court Theatre. For more information on the production, visit here…