Gaudy Parisian flowers in Moulin Rouge-esque sumptuous costumes, a shy little mouse sleepily playing a contrabass during a tea party with a loony hatter and a charming all-in-white magician – with a pompom on his bottom – who has a rabbit-daughter called Fluffy. It sounds crazy and makes no sense, but that’s the way it should be – we are in Wonderland, after all! 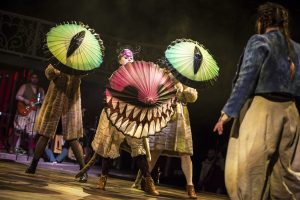 A packed Northern Stage is catapulted in the bonkers labyrinth conceived by – and may his soul forgive me for such assertion – the cuckoo yet phenomenal mind of Lewis Carroll. No doubt that the same Mr Carroll would be delighted with the impeccable feast to which spectators in Newcastle are invited.

As soon as the audience are invited, colourful and bold lighting devour the square-shaped stage. Alice – who evolves from being a ‘stupid girl’ that can’t read well to a heroin in the (sadly) imaginary world of craziness – lives on a boat with her large family, repeatedly annoying her ‘Mam’ with copious questions;  ‘What are we having for tea?’ though, being the crucial one. Before she can enjoy her favourite dish for supper – rabbit stew (see where it’s going there?) – she plummets in a room full of distressingly elastic doors, after chasing at breath-taking speed an ingenious magician. Yes, there are slight variations to the story at the beginning – however, they are performed so brilliantly that I probably prefer this version to the original one.

What really brings Alice’s adventure to life, is the live band at the rear of the stage – drums, violins, acoustic and electric guitars and even an impressive trombone! Actors bounce all over the stage like frenetic gazelles and then – after running around as if they are being chased by a hungry jaguar – grab their musical instruments and play as if they are as cool as cucumbers. I am almost in disbelief. I am honestly more exhausted than the characters, although sitting comfortably in the gallery and enjoying all that jubilant mess.

The representation of the Cheshire Cat is simply clever – three floating umbrellas (two for the evanescent feline’s hypnotic green eyes and the other one for its snout) in the dark, confusing the protagonist with its famously enigmatic words. Alexandra Tahnee (playing Alice) shineS throughout the whole performance – the credibility of her facial expressions are outstanding. Frustration, sadness, happiness, excitement, fear and desperation – she has them all in her locker. Christopher Price (starring as the White Rabbit and the Mad Hatter) also blows me away with his great voice and versatility.
Alice in Wonderland is a triumph of entertainment and will definitely make you ‘lose your head’. Although the show is clearly aware of its very young audience and the cast working hard to keep children excited all the way through, it is a magical treat for adults too – so there is no excuse for parents to miss this brilliant play. Let me warn you though – once stepping out of the theatre, you may want an amusing white rabbit as this year’s Christmas present… just saying! 5/5

Alice’s in Wonderland is currently showing until Saturday 6th January 2018 at the Northern Stage Theatre. To find out more about the production, visit here…