There’s a special magic in having the hottest tickets in town, one made better when that ticket is a front row seat to Broadway hit and current West End colossal Hamilton at the Victoria Palace Theatre. 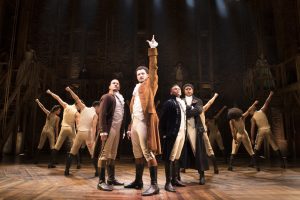 The hip-hop musical charts the successes and failures of Alexander Hamilton, a founding father of America and unsung hero of the country’s battle for independence. Charting Hamilton’s rise from Caribbean orphan to George Washington’s right hand man, this is a story of defiance, political revolution and most importantly personal legacy.

Lin-Manuel Miranda’s musical has taken the theatre world by storm, and it truly is no surprise that the glowing 5 star reviews have been given out in abundance amongst British critics.

Jamel Westman eases in to the quick paced, sharp witted role of Hamilton; playing him as a dedicated grafter desperate to serve his political beliefs. His acute restlessness allows the tension of the music and narrative to build around him, making Hamilton’s personal struggles with infidelity feel more emotionally wrenching than perhaps the script caters for.

Such a sheer force of a musical requires a cast of equally talented players. Luckily for this UK transfer, Miranda has found a stellar line up, particularly with Giles Terera as Aaron Burr, Hamilton’s acquaintance and later adversary. Michael Jibson plays a perfectly purring King George, whose campy Britishness adds a
restorative level of humour that evens the pace.

Rachel John is a delight as Angelica Schuyler, arguably one of the strongest females in the cast. Rachelle Ann Go as Eliza Hamilton has a timidness that grows into a poetic determination, allowing the elegant pathos of her closing number ‘Who Lives, Who Dies, Who Tells Your Story’ to wash over the audience.

Those closing lines ‘who tells your story’ resonate the musical’s underlining message of agency, begging the question as to who else has been eradicated from the American independence story in favour of a white old man?

The phrase ‘this is a must see musical’ is branded on anything with so much as a high kick and belting score. But Hamilton is more than just a power house musical, it is a pivotal moment in musical theatre history that will no doubt shake up the future craft of the genre.

Miranda’s work relishes in its own uniqueness. The use of colour-blind casting is of huge importance when you consider that this is a sold out West End run. Work like this should be an example to the UK on how to put diverse work at the forefront of the theatre industry.

This is a musical on steroids. The sheer physical capacity of the cast is outstanding, far exceeding anything I have ever seen on stage before. History is playing both on and off stage in the West End this year, you would be mad not to try your luck in getting a ticket. 5/5

Hamilton is currently showing at the Victoria Palace Theatre. For more information on the production, visit here…