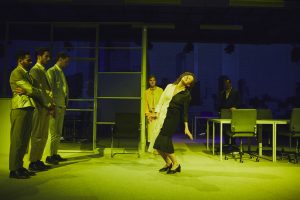 In recent years the Japanese government has tried to revive the country’s stagnating economy and to fight unemployment by means of privatization which has led to less job security and more workers with temp jobs. Toshiki Okada tries to shed some light in his highly stylised and funny trilogy on what is happening to those who fall prey to this dehumanising policy.

Toshiki Okada is one of the most important contemporary artists in Japan. He originally created this production with his “Chelfitch” company in 2009 and took it on a world tour. This was his first work as a stage director in Europe, cast with members of the Kammerspiele ensemble.

Performed by a cast of six, the office workers in these three short plays seem stuck in their own universes, formed by rhythms of thought and feeling that rarely correspond to what is going on around them. When they speak — in monologues that entail mainly repetitive empty phrases — they perform a ballet of jerks and twists, movements that are often completely unrelated to what they are saying, whilst classical music is being played.

In Hot Pepper, three temps (Hassan Akkouch, Thomas Hauser and Christian Löber) plan a farewell party for their colleague, who has been laid off, which leads to a discussion about why they are the ones who have to organise it in the first place instead of the workers with permanent contracts. They expect to follow her shortly and seem far more interested in the parties that will be given for them. Unable to express their fear with words, they twist and undulate because any other means of expression has been taken away from them.

Air Conditioner is a duet between a woman (Anna Drexler) who is freezing in the office and a businessman (Samouil Stoyanov) who seems to have a crush on her. As much as they talk, they fail to communicate. Samouil Stoyanov is wondering which one of his skills he should focus on, whilst Anna Drexler continuously complains about the low temperature in the office – a chilling 23 degrees Celsius. Stoyanov’s movements soon turn to a grotesque courtship dance.

Finally, in the Farewell Speech, we meet the laid-off temp worker Erika (Julia Riedler) who soliloquises about preparing for her last day at the office, and the surprise that is waiting on her doorstep: a dying cicada. Her speech is sad, metaphorical and hilarious at the same time but nobody seems to listen or to care.

A highly stylised production that shows the dehumanisation of our working life in a grotesquely funny way. 4/5

Hot Pepper, Air Conditioner and the Farewell Speech was shown at the Münchner Kammerspiele. For more information on the production, visit here…