Hanna examines old themes in new – and genuinely compelling – ways. Nature and nurture, motherhood, blame, responsibility, class and ethnicity all collide in this one-woman monologue that unpacks the consequences of a life-altering mistake made in a hospital wing. This is a poignant personal tragedy, made more affecting by recent news of NHS chaos and cuts post-Christmas 2017. 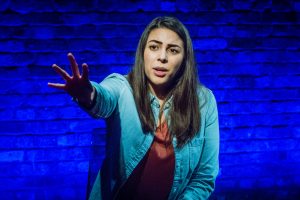 Sophie Khan Levy is riveting as young mother Hanna. Her half-apologetic smile and earnest eyes plead with us to understand her back-story and empathise with whats happened, even as she unfurls its twists. Khan Levy is warm and engaging as she delivers her story, perfectly balancing the comic moments alongside their tragic counterparts. Hanna blames herself, mostly, admitting regret for not having better stood up for herself at points. Her narrative, however, suggests that this may be more of an internalised method of self-policing than an objectively observable fact. The displacement of responsibility, and the driving question of where the blame or guilt lies, is what maintains this play’s pace, aided no doubt by George Turvey’s direction. Sam Potter’s script questions the indifference of society’s mediating mechanisms – as Hanna states, it’s never the affected kids that get to decide what happens to them, but blank-faced lawyers – thus articulating an acute interrogation of the restrictions that class differences may manifest for our young.

The issues with which the play grapples, then, are persuasively performed by Khan Levy, and the text has a deft touch when Hanna is at her most conversational. This may be more to Khan Levy’s credit, however, as the last third of the play is, at times, in danger of becoming clichéd in its stray into high drama: her character and exploration of her relationships are sacrificed, flattened somewhat in favour of tension, and the humanity is therefore diminished. The ending feels a bit flat – but then, in fairness, I’m not sure that a more rounded conclusion could have been reached. Hanna is an interesting play, well performed. It’s not perfect, but it’s well worth its 75 minutes.

Hannah is currently showing until Saturday 20th January 2018 at the Arcola Theatre. To find out more about the production, visit here…