Every January the London International Mime Festival (LIMF) kick starts the year with an impressive dose of international visual theatre. From puppetry to live art, LIMF has showcased the work of some of the biggest movers and shakers in the physical theatre scene. 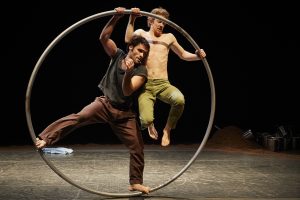 Tula and Kinsman’s contort and manipulate the Cyr with ease, showing the pair’s sheer strength and creative finesse. Their mutual trust is palpable, never missing a single beat, rendering the routine first class. Though I wouldn’t expect anything less, a dud circus performer is easy to spot and expectations are always high when it comes to circus skills.

What Santa Madera makes up in breathtaking skill, it lacks in developed narrative. Compagnie Mpta’s work is focused on its analytical, research based approach to contemporary circus. It aims to explore the ‘religion, paganism, multiculturalism and identity’ of two brothers, though you would only know this if you had read the photocopied print out before the performance.

Jeremie Cusenier’s lighting design is at times beautiful and others arduous. Halcyon glows feel tranquil and well planned, but the harsh strobe lighting needlessly detracts. A little goes a long way with strobe and too much can make for queasy viewing.

Sound plays a sizeable character, with Glidas Céleste’s beautiful soundscape framing the piece. Binaural and enthralling, it provideS elements of clarity in the less comprehensible sequences.

Tula and Kinsman showcase this apparatus to its extremes, an hour long tour de force of showmanship. Santa Madera is playful and ambitious, though its reliance on the metaphysical never really hooks on to any resonant message. I am visually impressed, though rarely stunned by the overall piece. 3/5

Santa Madera was shown from Friday 12th until Sunday 14th January at the Shoreditch Town Hall as part of London International Mime Festival 2018. To find out more about the production, visit here…